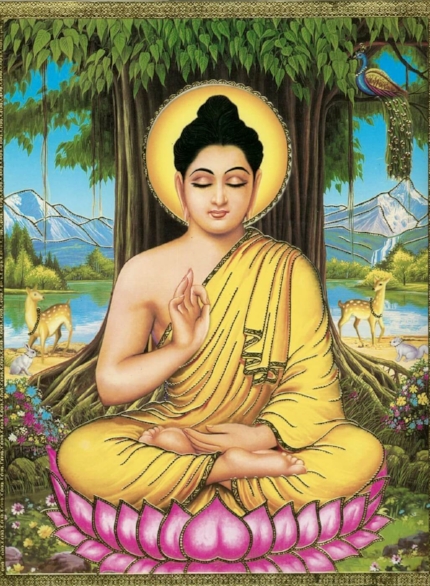 Last night, I was lying down on my couch, pondering where I am as a mind.  Certainly, it had felt that consciousness was headed in the right direction, with the relaxed state that came of the mushrooms, but to have more confusing phenomena made me once again wonder - have I really healed?  Have I made true progress?  Why does this mystery of what to do have to continue?  Why do I keep getting swept away by phenomena, and how do I conquer this level?  As I lay there wondering, a vision of Gautama Siddhartha sitting under a bodhi tree popped into my mind's eye.  I decided to take it as a sign to reach out to the Buddha Himself in prayer - a figure I hadn't worked much with in the past, compared to others.  I prayed for many things, including getting past all unwanted phenomena, and, well, to achieve Buddhahood.  So we'll see where this goes.

Speaking of Buddhist stuff, I want to reflect on some of the cartoon visionary absurdity that came of earlier stages.  My cartoonist's soul had a tendency to imagine a strange version of the Dalai Lama, who would appear and spout anecdotes of "wisdom" that were not very sophisticated.  He was quite whimsical in his movement, perhaps a little too whimsical for his own good - rather like something Don Bluth might have animated.  I was amused but also so lost in the phenomena at that point that I would interact with him and try to call upon his "help" whenever I was at a loss as to what to do, especially when I was on the streets.  He went from being bombastic and silly to a demented old man off his medication, to a deviant pervert who said creepy shit.  One time he was rather Colonel Klink-like in nature in the way he spoke... by the time my mind was completely gone, just before my arrest, he appeared as a figure that inflated, like a Macy's Day Parade float, commanding me to do things like turn off the ceiling lamp, because the mercury in the lightbulb was in pain.  This is a riveting thing to look back on and laugh at now, but at the time I was too embarrassed to talk about what exactly I was following orders from, when I would perform certain rituals... to put it into words really put it into perspective how absolutely stark raving mad my mind had gone from the spiritual emergency.  (There's some brilliant cartooning fodder from all of this, but I'm not interested in picking up a pen these days.)  I wonder what the real Dalai Lama would think if he had observed this?!

I might go back to the Toronto Comic Jam once it's back in the pub, after numbers go down with the pandemic - I do miss cartooning just a little bit, doing a panel here and there.  I realize I haven't drawn anything in over a year, except for one illustration for someone.  I have painted, but not drawn.  Mostly, I write... I guess it's just what I feel compelled to do for self expression, having completed a full book series.  If I do comics again, maybe I have to reach a new level of consciousness before I can pen anything major.  It's just how I feel right now.