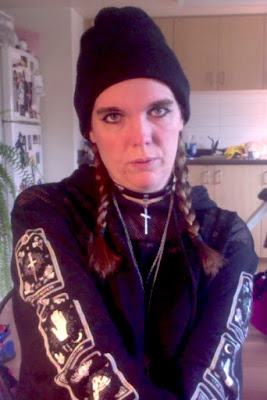 Following up on what I have suggested before, this recent place of calm that I have arrived at, in my mind and in my soul, has been consistent since late November, and stronger since mid December.  Because of how much easier the days have become, I think it's safe enough to declare I have reached a new level in my healing.  I am free from the fear of there being something terribly wrong with my neurology, it was likely to do with structures of levels of consciousness, which were changing, and may have needed a mighty reboot.  I noticed profound change after calling to Metatron for "a new mind", and after further commitment to Jesus as my saviour.  Though I have prayed to many, the gods that seem the most prominent for me, among them, are Jesus, Mary, Sekhmet, and Krishna.  Sekhmet is my goddess for most magick, while others are to be called upon for enlightenment and refinement.  I am also feeling stronger as a body, and perhaps even slightly wiser.  So something definitely has changed.  (I had been having premonitions that something great would happen in November, and that December would also be good, so that proved to be true.)

I am now keeping my eyes peeled for ceremonial magickal wear, a robe or dress that suggests Sekhmet, be it red, or with a lion on it as part of its design... something that evokes Her power.  I have my Catholic veil when I do Christian folk magick and rosary, but for Sekhmet this doesn't feel appropriate.  It's not pressing that I obtain this, but if I find something I like, I may buy it.  Cobra design could also work, because that's an animal affiliated with Her as well.

I keep experimenting with my altar.  One thing I channeled is that in working with the orders of Creation and Destruction of the 5 Chinese metaphysical elements, it's as though I am invoking natural order to work with the ceremony, which is a unique way of going about practice.  To the best of my understanding, calling upon the elements of other systems (like Earth, Air, Fire, Water, and the Spirit, in Wicca as an example) does imply the elements in nature, but something of the Chinese model implies nature itself.  I need to refine my studies a bit.  I must admit, I have not been in a bookish mood for a while, preferring contemplation, unlocking inner knowledge, and attempting to read the Akashic Records, to see what they have to say, later to compare what I get to what I find on the internet.  I used to have a practical Daoism book, but it vanished... I shall have to study this system again, as I did many years before (but with a mind that was rather wild at the time).

Study has always been arduous for me, for I have a mind that wanders.  I love reading, but if my mind goes elsewhere, I may find myself rereading the same passage over and over again, realizing that I took in nothing.  My mind has always been in the clouds, even when I wasn't an initiate.  This used to drive me crazy, but now, living the simple contemplative life that I do, if I'm having a day where I simply can't take in outer knowledge, I won't.  I will wait for a day where my brain thirsts for it.  (I would make a lousy university student!)

I am convinced the reason schools demand that students think, think, think all the time, from kindergarten all the way to post secondary, is to generate reliant neurotics who will depend on capitalism and all that it has to offer as a means of satiating the monkey minds it produces.  It makes consumers out of us, and often ill minds too, so we become customers reliant on medications.  Humans are not designed to be trapped in thought all the time.  Thought is a sense, as the Egyptians believed, it shouldn't be considered a healthy base state of mind.  It burns you out and leaves you dissatisfied, worried all the time.  The "pharaohs" of the modern age, the billionaire class, know exactly what they're doing with the society we live in.  It's all such a load of shit.

I for one won't shed a tear if the West comes to its knees, knowing how much it has antagonized other communities.  I will feel for the families who struggle to be sure, but the beast of capitalism must retire, and the old model of sanity must also be replaced with something that equips citizens with the resilience they will need to make it through what is surely to come.  Genius and wisdom exist in every human being, but most people are not taught how to unlock them, nor are they expected to, I would imagine.

All the world's a stage - this expression is so true.  If you want your personal role in the play to be more interesting, now is the time to commit to an effective spiritual path.  Those who work with the Spirit will enjoy the play more than those who reject it.