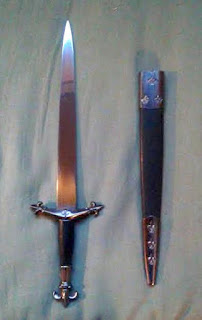 Just a brief post on my personal athame - something I obtained at Toronto's "The Occult Shop" one time on an impulse buy.  Thankfully, I have finally found good use of it as a banishing tool.  Concerned over what I let slide in the past, I now regularly banish after each ritual.  Being without a teacher (and often, having a mind incapable of studying, due to mental states I have been in) it's been trial and error, getting my practice sound, and my mind and soul grounded.  I am now certain the banishing I described recently helped unblock something that was complicating me, and wheels have turned since then.
This one has a Fleur De Lis design, which attracted me because of it implying the Holy Trinity, the Virgin Mother, among other things in Christianity.  (I also have French Canadian blood, but that's not one of the reasons I bought it.)  I was rather upset when I discovered there's some offensive overtones to the Fleur De Lis because of French nationalism, so I'm going to just have to explain that it's about religious symbolism in this case, because I still like this athame's design.  I think this was around a mere $40, which was such a good price I wanted to grab it.  I haven't decorated the blade with anything - I probably will end up leaving it, though maybe I will decorate the handle with something someday.
While I feel that my wand is something I use to draw in and conduct power with, the athame I see as a magickal dispatch tool - just what I sense when I hold these tools.  The athame rests comfortably on my Sekhmet shrine, while the wand tends to rest on my altar. 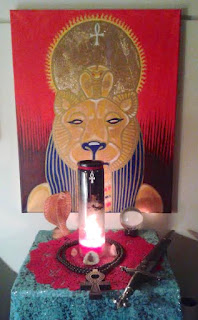 I have been practising a lot of magick during the new lockdown - a perfect opportunity to continue exploring.  Since there aren't many stores to browse during this time, I have taken to regular visits to Dollarama (don't laugh!) for candles and other things that could be used ceremonially, or for craft supplies.  There's a few stores that sell resins and other metaphysical supplies that are still open, so I have been visiting them as well for ritualistic consumables.  Sage is a plant I offer to Sekhmet in prayers, and it's probably time to stock up on that again soon.  (I hope I don't have to resort to shitty industry tobacco when I run low on the good tobacco - I don't even know how well that would work as an offering in magickal practice and prayer.  My regular seller is currently closed due to the pandemic, and hasn't restocked in a while.)
-Saraƒin
Posted by Sarafin at 05:47