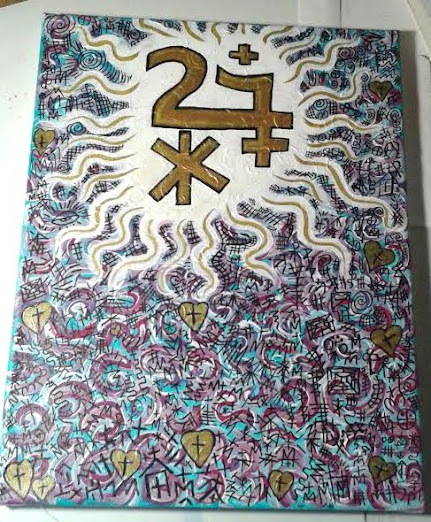 (It would really help if I had a decent camera, and if I knew the first thing about photography, wouldn't it?!)

Here's a painting I did last night that I am calling "Halaliel 1", which might be the beginning of a series where I allow the subconscious to take over and do at least a part of the piece.  That's again a sigil I channeled, that I had read is affiliated with mystery angel Halaliel, whom I later read was an angel of karma that Edgar Cayce channeled in one of his sessions.  Not sure how relevant the sigil truly is, but I liked the design enough to take note of it, and did this painting to incorporate it, at least as an art piece.  (I might do other Halaliel paintings, using this sigil, this one was an early experiment.)

I guess the chaos in this painting suggests a subconscious that is still in pain, but the symbols themselves are positive ones, mostly about Christ, Mary, the kundalini, and other hopeful things, so I want to say it indicates transition to wellness, not illness.  There are some dark symbols in it, objects affiliated with asylums, but I feel like they evoke leaving these things behind, rather than continuing to suffer from them.  I built up the colours in the background before letting it dry and them applying the inks with a black marker.  Acrylics on canvas, with gold and black pen applied.  (A friend says it has Keith Haring vibes, I can see that.  I also see the slightest hint of Jackson Pollock, when it comes to the colours in the background.)