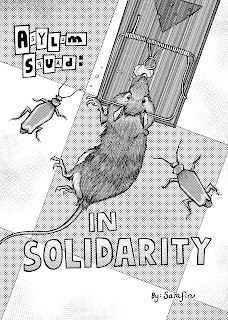 I just picked up the remainder of the run today - the rest are without awkward errors.  Caversham shall receive these books soon (probably - I have to call them first) to have in stock, the faulty copies might be back up books, I will have to see what they have to say.

Tonight I reread the whole series, cover to cover, for the first time since all volumes came to print.  I like how the story flows.  I see how rather dry, sad, and dreary "In Solidarity" is as a book, compared to former volumes, but that was rather intentional.  It's sobering, evoking the spirit of what is really going on, after the pure fantasy of the act that came before it.  It had to go in this direction for a while, I feel, to come back to Liz's harsh reality, and then some of the playfulness of the odd tone returns with the epilogue, but in a new way.  Just as "The Psychosis Diaries" was designed to bombard the reader with the experience of psychotic states through its bizarre, wordy narrative, this book captures the misery of post institutional life.  I am sure it will have its haters, but this comic is still an activist one, and I couldn't forget the spirit of Mad Pride without touching on what many survivors feel once they leave the mental hospital, if they end up in shoddy supportive housing.  "The Jung Ones" was fruity lunacy, which was suggestive that the Ajna Project itself is not to be taken seriously, while "Monster Hospital" was slightly like a John Hughes flick, with its "The Breakfast Club" overtones.  I also want to note that "The Jung Ones" was a book about false empowerment (in the Ajna Project), while "In Solidarity" was a book about real empowerment, when the Squad takes back their lives with Mad Pride.  I have a quirky writing style, but I give myself a pass, writing about a subject such as this.

Some things might have been added to emphasize the saintly outcome of Liz's life, if I had only found my ending sooner to incorporate them.  Maybe she'd find sanctuary in a local church on a bad day... maybe this volume would have included a touch more Catholic imagery, just as previous volumes had.  But I was late to figure it out - when I began "In Solidarity" I still had the original ending in mind, as much as I was sure it might not be the finest.  I guess this gives the comic some complications as a strong plot, but again, I am not a professional writer, I made this out of the love of doing so.

The Beguiling will be taking on this book as well, once they work with consignment again, something they aren't really considering with how shopping is under current COVID-19 restrictions.  I am not looking at any other stores just yet, in this city, until shopping restrictions are lifted.  Damn this pandemic - it killed my chance at having a final book launch!