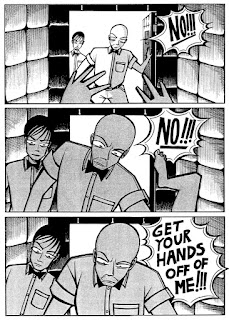 I thought to do another article about choices I made for "Asylum Squad".  This one is about how I wanted to go about treating my characters with dignity - something I felt was important for a large contingent of my audience, which was the psychiatric and consumer survivors crowd.  Here are some of the things I did to maintain that:

Back in "The Psychosis Diaries", there is a rape scene, which is based on a real life event.  Rapes are hard to get right without being exploitative - they are often used as a trope for shock value in fiction.  I didn't want this scene to be for shock, but rather, as something that would throw conflict into the character's life, in how it was falling apart, and also to discuss something that actually happened (although certain details were changed).  The only way to tastefully pull this off, I felt, was to make sure that it was implied, but not shown in any overt way.  I am not sure how my comic would rate as far as what age it is appropriate for, but if I were going to suggest a target crowd, I would recommend the fresh outta high school young adult crowd, because there is some adult stuff in there, even though it's not exactly erotic.  I think enough teens in high school would be fine reading it, I'm just not sure what their parents would think if they did.

In a similar vein, when characters were restrained in the hospital in the main plot, some degree of censorship was involved, at least when Sarah gets it.  Because she is vulnerable at the time, I felt it important to incorporate a sense of helplessness at the hands of the orderlies, from her perspective, while not showing what was happening to her.  This gives the character dignity, but it also made it a frightening scene.

When Cath gets restrained, it's a bit more provocative, but only because she is teasing the orderlies, and in a way this was a fan service scene designed to tease anyone who reads the comics simply for the asylum bondage overtones (tsk tsk tsk).  Because I didn't want to carry it through too far, I decided she should go on to puke all over herself because of the combo of meds and alcohol, destroying the kinky tension, making it more of a humorous scene, in the end, than anything else.  (As mentioned before, the aesthetic of the comics flirts with that kind of erotic asylum art, but it's not just to grab reader attention in general - it's also to draw a specific crowd that might otherwise fall for this sort of romantic nonsense.  Having lived this life for a year as an inmate, I can say that it's absolute horror, so when I see asylum romance done badly in fiction, it's truly eye rolling, but I also believe it can be dangerous.)

A comic that ultimately has an activist's message, a relevant thing or two to say about the soul, and that ended up getting a following in academia needed a certain quality in its tone to get away with what it does in its strange whimsy.  When Liz goes back to St. Dymphna's in "In Solidarity", it was as though it was strictly business, nothing like the sassy "Girl, Interrupted" stuff in Act 1.  I wanted it to be as though she was ultimately moving on, so her stay for that time was short lived, and just about a "tune up".  Because that's life for psychiatric survivors, often enough - we may go through the crazy oppressive crap that gets overdramatized in film here and there... but usually, it's just lectures from doctors about taking pills, and figuring out what our next move is, once we get out again.