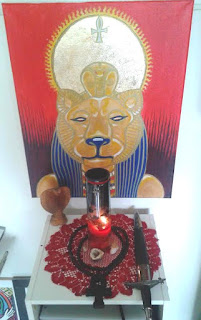 Something really interesting happened yesterday after I got the sense to give a variation of the Lesser Banishing Ritual of the Pentagram a shot.

First, I was trying to learn the more complex version with Kabbalistic Hebrew utterances, which I suppose is Golden Dawn (?), but it was too much of a song and dance to perform intuitively without practising it again and again and again.  (I get the sense magick works much better when it is second nature.)  So, I found a simpler alternative on a YouTube channel, and called for Sekhmet, using tobacco, to work with me using it.  The intention was to banish any lingering magickal influences that may have been from old intentions, dating back to perhaps 2006, believe it or not.  Finally finding good use of my athame, I drew the pentagrams of the four cardinal directions and commanded the intention, and then my body began to shake, rather like a kundalini reaction.

As I sat and observed the reaction, I felt "sexy" feelings in my chest area, like a glow of heat and cooling, something in the chakras.  Opening to channel (which of course I am still working to refine) I got messages about magickal complications coming out of an enlightenment spell I cast back in 2006, which led to my kundalini getting stuck, making me sick.  I have primed higher chakras with intentions to Jesus, Mary, Metatron, Krishna, and others, but without being able to overcome the complication, there was still a kind of block.  It's possible I have just overcome that.  (I still believe the demon thing was real - that was a separate issue, and I resolved that in recent years.  Sin might have still been lingering too, but it seems a byproduct of unresolved magick was something else to consider.  I also surrendered that old enlightenment intention to Sekhmet, asking Her to work with it, shaping it to be something finer, now that She is in my life.)

Today I woke with a calm mind and less neurosis.  Above, you'll see a picture of my new Sekhmet shrine, which I made yesterday because of a cubby bookshelf I discovered in the hall of my building - someone was throwing it out.  I wasn't certain that my practice could include this athame that I had impulse purchased many years ago, but it looks like I now have a regular practice of banishing after ritual upon me.  I feel like I should have known better, but again, I was launched into this with very little religious knowledge - when I turned to others for help, they turned away from me, and I was on my own.  I guess the Self is my teacher, and I am finding new methods from old knowledge, bending the rules, and magickal fundamentals need to be understood as I heal.  I shall banish after every ritual now.  Folly is also a good teacher... it welcomes in great lessons.