The Marian Shrine of Gratitude: A field trip... 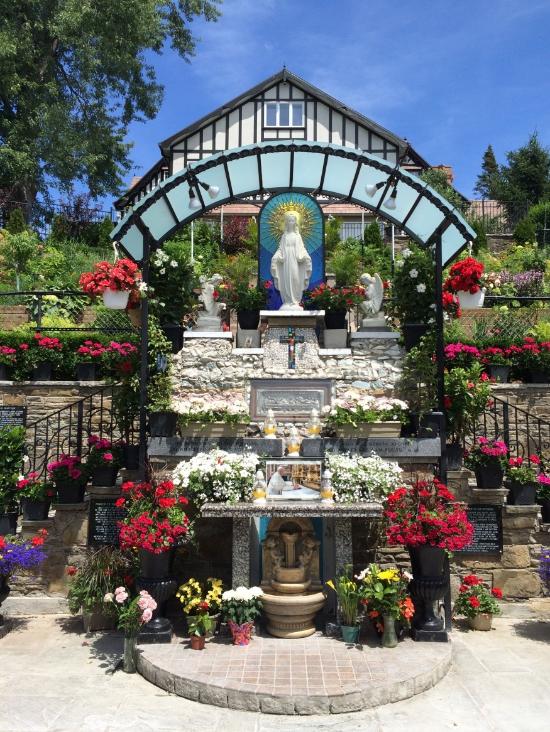 Today, two other members of my rosary coven and I took a trek out to see the Marian Shrine of Gratitude, out by Weston road and Sheppard avenue, in Toronto.  A mutual friend of ours discovered it on a blog - it's a sacred site that has been said to create miracles for some who visit and petition Mary.  "Ok - we're going!" I said, when I heard about it.  Originally, two others were going to join us today, but they felt that with COVID-19 numbers rising, they would put it off to keep our numbers small, until another day.  So, it was the Anglican Druid, the St. Joan of Arc devotee, and myself who went.

It was a cool but beautiful day, and as we rode the bus there from Sheppard West station, I remarked on how lovely the beams of heavenly light emitting from the overcast sky looked upon the horizon.  When we arrived at the house where the shrine stands, the Druid nearly accidentally crushed a garter snake on the path, but the St. Joan devotee quickly noticed, and we pulled him away - thank God, since the serpent is a symbol of sacred power, and to me this was a sign of how powerful this site is.

The site reminds me of a secret garden - you wouldn't likely know it was there unless you were told about it, it's rather tucked away, overlooking a sports field down a hill.  Rosaries and crosses on strings hang from the branches of trees planted there - many have left notes and offerings, petitioning requests.   It looks as though the shrine was once a pool, but was converted in time.  The story is that a priest was cleaning the area, when a branch lanced his eye, and he called to Mary for healing.  Not only was his eye saved, but he was gifted perfect vision as well.  This led to the land being recognized for its healing properties, rather like a Canadian Lourdes.

I felt a powerful reaction and greeting through channel when I stepped into the courtyard of the shrine, and so I pulled out my litany booklet, got on my knees, and recited a litany to Our Lady of Perpetual Help for blessings and healing.  Then we did the rosary, and I paid a small donation and lit a candle as well.  We stayed for about an hour, I decided that I would definitely return one day, probably in the spring.

Also neat was a rather fluffy, handsome looking cat strolling the premises - not sure if he belongs to the priests, but he seemed to like the area, and fit right in with the nature about the shrine.  There was also an indoor portion where an altar stood, with seating, and a place for prayer requests.

It's nice that there's something like this in Toronto - I never expected to go to a sacred spot this close by.  The power I felt in Sedona was more of a sensation of great spiritual presence - this had a bit of that, but was also very mystical in that I felt greeted there.

I recommend it for anyone who wants a tiny taste of the sacred in a city that doesn't tend to give the sacred much thought. 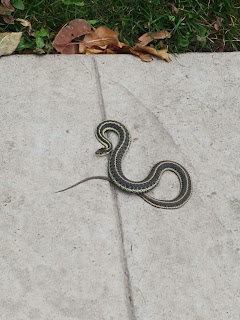 Our little friend from today - glad they survived!

UPDATE: In other news, I am collecting the proof copy of my final graphic novel on Tuesday - once approved, I will be printing 100 copies of the book and putting them in stores.  A booklaunch looks unlikely at this time.