Mother Mary Jane and other things... 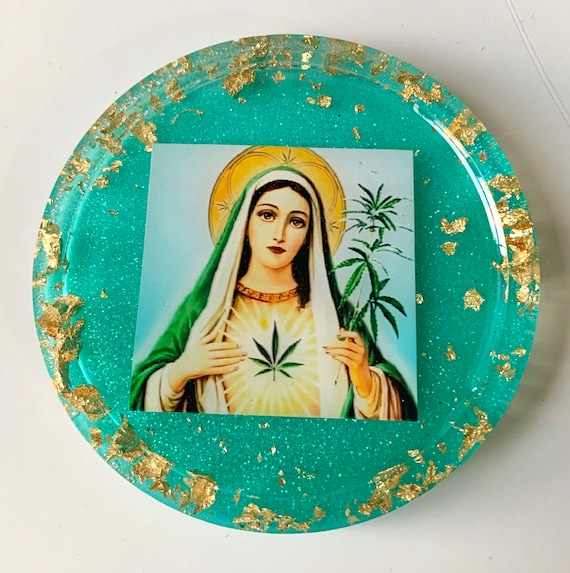 I am trying another source to pray to for marijuana spiritual medicine - Mother Mary.  I'm pretty sure there are mild complications in my nervous system, but that things have improved.  Last night I panic deleted several good old articles about fighting my demon, which I now regret doing.  It happened because of some paranoia that crept over me.  This lasted about an hour and then it ended.  It's a sensitivity I have that makes me commit mild mistakes - nothing serious, just tossing an object I wish I hadn't, or changing things on here, for example.  I hide it so well that no one suspects anything, and I guess doctors assume I'm fine, so I can't get much help from them beyond antipsychotics.  It's definitely improved since I began consuming CBD ritualistically, but I didn't consider the Mother for this.  Jesus helped a lot, but Mary has a special hand of Her own with healing, so I am now turning to Her for further help.  One would imagine that negative forces torturing the brain would take its toll on things, but perhaps not in as devastating a way as drugs or an injury.  I still have mild convulsions when I am trying to sleep, but they're not grand mals and I am consciously aware of them.  I hope I don't need anticonvulsant medication!

I have started to (sometimes) wear a Catholic style veil as a ceremonial garment when doing certain rituals, for psychological headspace.  I kind of want to get a cassock as well, for something more masculine.  This veil was found at Value Village and appears to be homemade, for perhaps a confirmation ceremony.  Mostly I wear it at my rosary Zoom meetings with the other spiritual freaks in my life, but sometimes when I am doing ritual on my own as well.  I have concocted a rite for helping spirits in purgatory, where I invoke Christ into the flame of a Sacred Heart of Jesus candle, make offerings of tobacco and frankincense, and recite the Litany of the Faithful Departed and the Efficacious Novena to the Sacred Heart of Jesus.  November is affiliated with death and we got into praying a chaplet to help those who have passed on, so I wanted to try a rite for deceased friends and family.  I hope I have helped them!  (Maybe Dad has moved on to a dimension full of book mobiles, orange pekoe, siberian huskies, and endless loops of Ennio Morricone music never heard before, which is exactly what I imagine heaven would be like for that man.)

Some things in life are certain - toast always lands butter side down, lighting a cigarette will summon that bus you've been waiting for, and spirits will visit when you're indecent.  Uncle Bob returned to say hello, and I had no pants on!  I shooed him away, telling him to return within the hour, and when he did, I was decent.  This was exactly the same as what happened with my Dad!  One time I was on the toilet - DAAAAAD!