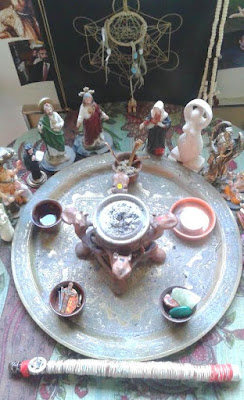 I got a further sense that I could keep adding to what I had set up on this altar I am experimenting with.  Wood, Earth, and Metal needed more.  For Wood, I sensed that tobacco, being a sacred plant of prayer to higher sources, could easily be added as twigs from the ceremonial tobacco I buy.  (These twigs are normally annoying to work with in prayer over a charcoal, so this is an easy way of using them another way.)  So twigs of the plant were added to the container holding the smudge mixture.
For Earth, I was drawn to agate, malachite, and fluorite, for some reason.  (I must admit I am not up on my crystals, but I channeled while leafing through a crystal book that these would be good for what I'd be working with.)  In they went.
For Metal, copper had been recommended, but I was told another metal belonged too.  I concluded it was iron, but not having anything elegant made of that metal, I got out some nails, and popped 3 in the container - symbolically, I am representing the nails of the crucifixion here with 3, which is an elegant way of magickally using something otherwise utilitarian in appearance.
I also dug out a pentagram and attached it to my wand, to make it more talismanic.  I have a feeling this is going to be an art project in and of itself, as I explore how to build on this sacred space.  I consider tobacco one of the finest things to use for magick, prayers and blessings, and I encourage anyone magickally oriented to investigate it with their practice.  It just adds to any intention you put out to the Spirit.
I also channeled that although I should consider myself religious, I am not to consider myself one who follows religion (although I have tried, and have seen how practises in religion can help).  Rather, I am creating religion out of what religion gets right, where it is successful.  My mandate is, I ask - what does Buddhism have in its ideas that Christianity lacks, what does Christianity have, in its own way, that can really help someone invoke God?  What do Pagan religions understand about exerting the Will?  There's much to consider in the great paths of the world.  I think of the old parable of the blind men and the elephant - each blind man touches a portion of the elephant, explaining what they sense of it.  All are correct, but can only loosely describe their own piece of the puzzle.  What if I were to dig for all the right pieces, and make something more grounded of it?  That is my consideration.  Not to say I will form a cult, but perhaps I am devising a new method as I explore.  I believe the soul of the individual is on its own path, and while some things are known to work for many, each person's adventure is unique to them.  I also believe, when it comes to the gods, the more the merrier, and more influences in one's life means a broader scope of awareness as a soul.  This is what I feel both Pagans and Hindus understand better than other groups, as two examples.

Things have been feeling really good lately.  I even began praying to Allah (using His name for God instead of others I have worked with, like Jehovah, Creator, and Vishnu) and calling upon biblical prophets.  Why not?  I feel massive changes.  I don't have a concrete system here just yet, so for now I'm exploring various spiritual methods, and they are working.  (Something I did last night was to figure to pray with tobacco in the prayer pipe that my 7 chakras align in accordance with the 7 Heavens, and today I feel quite good... maybe changes are coming from that alone.)

UPDATE: I just channeled a rite that could work with this altar.  Here it is:

1) Call upon the Spirit through Air, make your intention while offering tobacco to the charcoal.

2) Call upon the Spirit to invoke the deities you are working with.

3) Call upon the deities to invoke the 5 elements of Chinese metaphysics.

4) Call upon the 7 directions (East, South, West, North, Up, Down, and Center) to invoke the power.