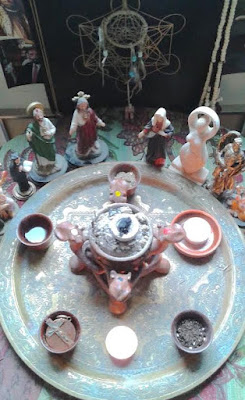 Last night I got a message to revisit an old idea I was playing with back in 2006 when I began seriously exploring my spirituality, which was to lay out the 5 elements of Chinese metaphysics (Wood, Fire, Earth, Metal, and Water) in a circle, like a pentagram, but also include Air of Western metaphysics, and the Spirit as the Quintessence/Ether.  According to channel, I was onto something in doing so.

I got the idea to use a dreamcatcher and have it represent the connection to the Spirit, hanging it above the altar.  Wood was represented by some smudge mixture an Anishinaabe family friend had given me, Fire by a lit candle, Earth by some planter's soil, Metal by metal objects, and Water by holy water.  In the center I placed a burner for incense, to represent Air.  The items were blessed with ceremonial tobacco.  (Fire has to be blessed each time I begin a ritual, as well as Air, but the other more stationary elements can remain with a single blessing.  Water evaporates with time so it's up to me to refill with holy water from time to time.

Spirit instructed to clean things up a bit by making the metal copper objects, so I got some old pennies and two pieces of copper jewelry - one a crucifix, and a First Pentacle of the Sun pendant.  Spirit also told me myrrh was best to represent Air.  Using a wand, when doing an incant, I call upon the Spirit to invoke the other 6 elements.  Then, after commanding the intention with a tobacco offering, I stir the Air over the other elements with my wand, clockwise, following the order of creation in Chinese metaphysics, for 15 rotations.  (For curses and destructive magick, simply lay the 5 Chinese elements out in this order: Wood, Earth, Water, Fire, then Metal, then proceed as with the order of creation in ritual.)  It's still an experiment to see what comes of technique, but it might be a fascinating alternative to methods in Wicca and other pagan practises.  Maybe if two other elements normally not brought into Western magick were incorporated (Wood and Metal) it would be that much more powerful?  Let's see!

(That second candle at the bottom of the altar is just an intention spell with Sekhmet - not something that is actively involved with the general layout, if you're wondering why it's in the picture.)