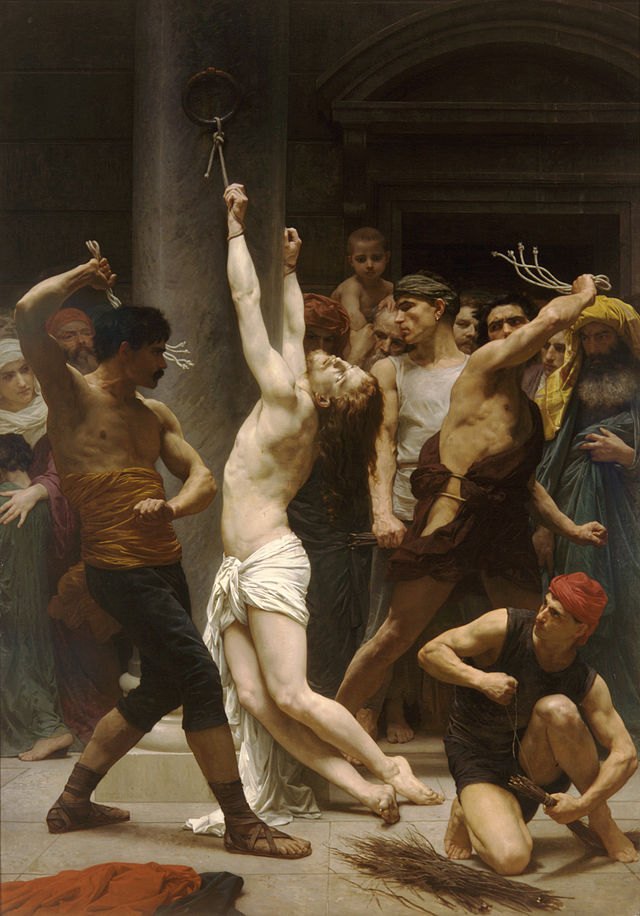 (This article is sure to tick off members of the Roman Catholic Church, but I figured I would write it anyway, due to things I have been channeling about various saints and holy figures.)

St. Lawrence is considered one of the toughest martyrs in the church, because - while being roasted alive, he smirked and uttered: "Turn me over - I'm done on this side".  The church would likely argue that the Holy Spirit filled him with the power to withstand excruciating pain... but was there something else going on?

I have channeled many times over that the historical Jesus was a masochist who was able to withstand the crucifixion because He enjoyed at least some degree of pain and humiliation.  I had also channeled that, in general, proclivities can arise out of sufferings from previous lifetimes playing out as kinks in the current life, to help the soul to therapeutically resolve past life traumas, but some kinks can also be in a person to help guide the soul through troubles ahead that are innate in the fate of the individual.  If a soul is destined to be a martyr, they might have something in them that allows them to process the pain a bit more easily... in short, God comforts the soul with something the church likely wouldn't want people to embrace in themselves: an erotic desire that would fit right in with the modern day fetish scene.

I am certain that the Holy Spirit has a hand in making everything that much easier - not many are masochistic enough to handle being roasted alive.  But I wonder, based on what St. Lawrence uttered, if there was already a quality of masochism in him, one that the Holy Spirit worked with to make the horror of the end of his life all the more tolerable.  This is a debatable topic and fundamentalists would want to take me to task over this, but I believe in a loving God who not only loves the kinkster, but might even create kinks in the person to soften the blows of their soul's personal journey.

Now, onto queerness: I consulted this with my very close friend, who is trans, to make sure there was nothing problematic about a (mostly) cisgendered woman such as myself discussing it.  It is common knowledge that many shamans have been trans, or have in some way been unusual sexually, or present an otherness that sets them apart.  I chalk it up to them being ancient souls who have lived many lives as many people, been both sexes, which likely has influenced gender down the line.  They are not confused, they are in fact more aware in some ways, having been many people, these people's qualities influencing many components of their current life, and this can include gender identity and sexuality.  Shamans kind of have to be ancient to be shamans, so it makes sense that if many shamans are trans, it's arguable that being trans could also be a sign of an old soul.

I have also channeled that St. Joan of Arc was trans, not a cross dresser, as many have concluded due to Joan wearing male clothes, which this saint insisted on and considered holy.  Many saints have had their queerness erased by the church, in favor of a watered down image that suggests a kind of sexual purity that the Catholics consider ideal.  St. Bacchus and St. Sergius were lovers, St. Aelred of Rievaulx, the patron saint of friendship, was believed to be gay.  Even King David from the Bible is argued to be at least bisexual.  I am not sure how much the church consciously covers up when considering a person for canonization, but I am sure there are a lot of insights about the saint in question that are left out in their life story, once presented to the public.  If Jesus Himself can be whitewashed to the degree He is in art, why not this?

I am mostly recovered from the assault now, BTW - the bruising didn't get that bad, and I only needed to pop pain killers twice.  I have had a few moments of being emotionally sensitive from the fear of what could have been, had this been uglier, had the group had weapons, but I need to let that go.  That's just the mind teaching me to be more careful next time.  Now I know not to be sassy if a group gangs up on me again.  (My Dad was guilty of this kind of thing in life as well, but he never got beaten for it.)  The man I was in another life was a fighter pilot in a world war, he wants to put idiots in their place, but he is housed this time around in an out of shape female body that doesn't know how to fight.  Better to be meek and alive than bold and in a casket.  I will leave immediately if anything like this ever happens again.  (Mars retrograde is in Aries right now, so maybe that negatively influenced things for me.)

UPDATE: I probably won't pursue a case with the assault, even though people have been saying I should.  I guess they don't get what life is like in the projects.  The restaurant was nearby, and I don't get if this group lives in the hood, is affiliated with a gang (even though they were likely in their early 20s, not very bright, and the girl who kicked me was more violent than she was skilled at fighting).  I do NOT need to be a gang target if I put one of them in prison and they find out where I live.  I cannot trust the police to protect me because of my lower class status, and I want to avoid being involved with them.  Also, with racial tension as it is, I don't want to be the white girl who sends the black girl to prison, even if she did do what she did.  I am trying to live a quiet life without much of anything to complicate things, not even pursuing ambitious things, and a court battle would disrupt my situation, making me feel vulnerable.  I say, walk away.  If she was this violent over absolutely nothing, she will likely be in prison for something else someday anyway.  Ego would want to press charges, Self says leave it alone.