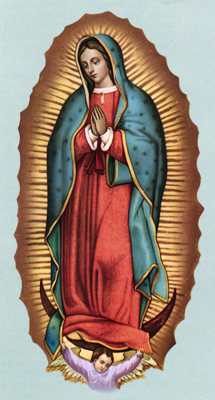 Just because I'm concentrating on Sekhmet right now (to try and open to this influence more), doesn't mean I won't continue practising magick with other sources.  Last night, I was working on a candle spell with usage of the rosary, some Psalms, and that strange symbol I received supposedly associated with angel Halaliel, and the source I worked with was the Virgin Mary.  (It was basically to further my initiatory process, something I had been concentrating on with prayer, but wanted to do some magick with, using other techniques, to move things along a little more.)  The result was a powerful sense of the presence of Mary - like a glorious motherly force opening up, radiant and loving.  It was quite beautiful, and it seems Mary is a great goddess for magickal work.  (I had composed an article about Christian folk magick on here a while ago, but deleted it when I wasn't sure about how well it illustrated the subject matter.)  It is my opinion that Wiccan techniques combined with Catholic sources and ritual is very powerful, and that Christian sources can even help open to Pagan ones... perhaps I will try again with another article on this subject sometime, for I feel I have insights that are relevant.  I find it disappointing that Wiccans frown upon Jesus and Mary as they often do - I get why they frown upon the churches, but these gods are so marvelous for working with magicians that They shouldn't be ignored completely.  They can be doorways to other sources in Divinity, if you bend the rules, just as the saints are doorways to Them.)

It saddens me, as I reflect, on how this demon left a path of social destruction in my life that might never be fully restored.  It convinced me of things about other people, told me to tell these people things about themselves, forcing me to do it, under its command, under threats of killing me if I didn't comply.  Once I was in too deep, I didn't even know what I was doing anymore.  I was a social pariah, and some won't even speak to me now.  My reputation greatly restored at this point in most circles, there are some that just don't get it, and might never... not everyone believes in demons.  All I can do is be the best I can be now, and hope people pick up on that, if I run into those who might despise me at this point.  There is something truly lonely and desperate about the person under occult control... thankfully, I seem to be free, and just in the process of fully bouncing back now.  I just wish I hadn't suffered legal consequences.

I'm experimenting with the use of a wand now, one I had made but wasn't doing much with.  (At some point I will post a pic of it.)  I am pretty much self trained in these things, taking from what I knew from my Wicca experimentation days, and playing with other things, bending the rules to see what comes of that.  Practice has become pretty fascinating, and I can get very powerful reactions to spells when they are successful.  It's rather funny - a few people have made me their go to "witch" when they need something done.  Again, witch is not how I identify, but I'll take it.  lol

It seems that once certain principles are involved, magick can come in many forms, and there aren't too many rules.  Psalms are really strong, though - I like to refer to them in practice.  And I always use tobacco when anointing a candle or object.  I may require further study to know more of what's possible with what's out there, but right now, I seem to have a good thing going with what I am doing.