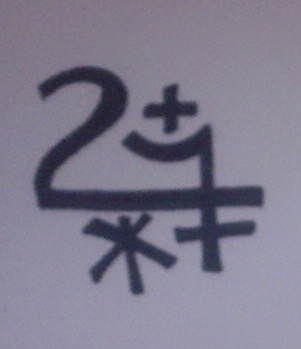 <- This sigil is one I received in recent memory that I was told is the symbol of an angel named "Halaliel".  This was a name I had never heard before, so I booted up Google and did a search.  Edgar Cayce, a psychic I have never studied, is said to have channeled an angel named Halaliel who spoke through him about a prophecy of the coming of the second Christ, someone who would be named Jon Peniel.  This happened a bit before it never happened again, and Halaliel is an angel never before spoken of in any sacred text.  Very strange, but I think it's super cool I channeled this without the knowledge of this angel, and I want to use this sigil on my business card design, instead of the old design I was playing around with, to promote my psychic business, since it was from the Spirit.  Halaliel is the "Lord of Karma", according to these channeled sessions with Cayce.

Also recently I began getting a yoni, which I deduced represents the Goddess, or Sacred Feminine power.  Channel is telling me that I have reached a level through working with the Virgin Mary and the Goddess where the Sacred Feminine is firmly established in me, and so perceiving the Sacred Masculine will feel easier on the psyche.  Looks like initiation time is winding down, and I am grounding, as I continue to heal my idiosyncratic neurology with CBD and practice.

Speaking of CBD, I am looking into a medical marijuana prescription now, though a clinic.  If approved, it would make it more affordable and I would likely get finer grade stuff.  Again, not looking to get high, no THC please, just healing.  I can see how it has helped and so even if this isn't approved, I will likely keep using CBD for the next little while, but my psychiatrist thinks it's likely to go through.  I am getting a vape from my Mom soon so I will make the switch from smoking to vaping and give my poor lungs a break, though they're handling things well.  The brain is definitely feeling quite happy, compared to what it felt before.

Aw, man - I caved and watched "The Craft" again last night.  Not gonna lie, that little piece of 90s teen fluff is so watchable that it's probably my favourite movie of all time now.  I want to say that a Terry Gilliam movie would be my fave, but no... fuck having finer taste.  I can't stop putting on "The Craft" every few months and enjoying it all over again.  Fairuza Balk gives me a she-boner, even though I don't find girls amorously interesting... she's just so fucking cool as Nancy Downs.  Love her!