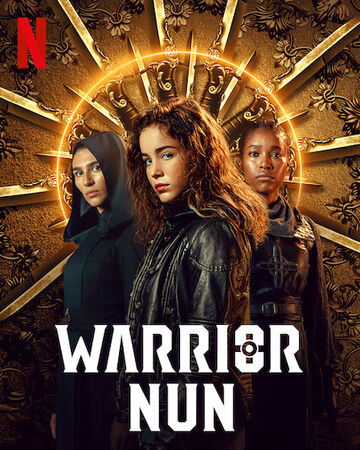 I managed to catch 5 episodes of this at a friend's house recently.  Not having Netflix, because I don't watch enough to warrant paying for it, I will still watch the odd thing here and there with friends at their place, but I'm not much of a screen gazer anymore.  Though 5 episodes probably isn't sufficient for a full review, it's perhaps enough to offer some commentary, based on what I have seen.

This is based on an old comic called "Warrior Nun Areala" by American mangaka Ben Dunn.  Though I have never read the comic, I know it had controversy with both Catholics and non-Catholics alike - the Catholics saw it as blasphemous because of the nun's skimpy habits, the non-Catholics thought it made the church look too positive.  Sister Penance, as a persona, is in part based on the idea of a warrior nun, because of my true life story of battling a demonic presence that attacked me, having followed me around for most of my life.  Anyway, how was what I watched so far?

It was incredibly tropey, kitschy, over the top, and silly... and I dug just about every minute of it.  The style is beautiful, though like "The Chilling Adventures of Sabrina" the cinematography was perhaps a bit too dark, since we had to play with the brightness a lot on my friend's television.  It evokes a kind of 90s feel - I was calling it "Catholic Buffy", because of its style.  I can't quote any right now, but there were some fun lines, and these nuns really kick ass.  I want to keep watching it once I get back on Netflix, sometime.

Not everything worked - too many scenes were drab and boring, and you just wanted to go back to watching the nuns do their thing.  The protagonist is yet another reluctant heroine, suffering from Usagi syndrome, who in this case is neither a nun nor a warrior, but is still the "chosen one", which is a super tired cliche.  Some of the dialogue was flat out silly, and pacing could be weird.  The overall story is utterly absurd, but the series is so self aware that I forgive it for being ludicrous.  Sometimes fluff can be delightful, too.  (Again, I am not sure how it proceeds after episode 5, but so far, it's been a fun ride.  Mindless entertainment, but enjoyable.)

I had a really funny, weird dream the other night.  Well, the first part was eerie - patron saints were floating through the walls, haunting me to observe me, which made me super worried about how to behave.  Later, I was sitting on the lap of St Pope John Paul II like he was Santa Claus, and laughing with him about various things.  I really would love to know what my analyst would have to say about that!  I suspect he would say it's simply an example of the mind at play, after taking in a bunch of Catholic stuff.

I am back to trying smokeable CBD, which feels much more effective than the drops do.  I also ritualistically pray with the plant when I use it.  I think it might be helping with neurology a bit, since there has been some definite improvement since using it enough.  I wondered last night if yin and yang are out of whack in me, so I have been praying that any imbalances in my system be restored to good health.  Hoping things improve again soon.