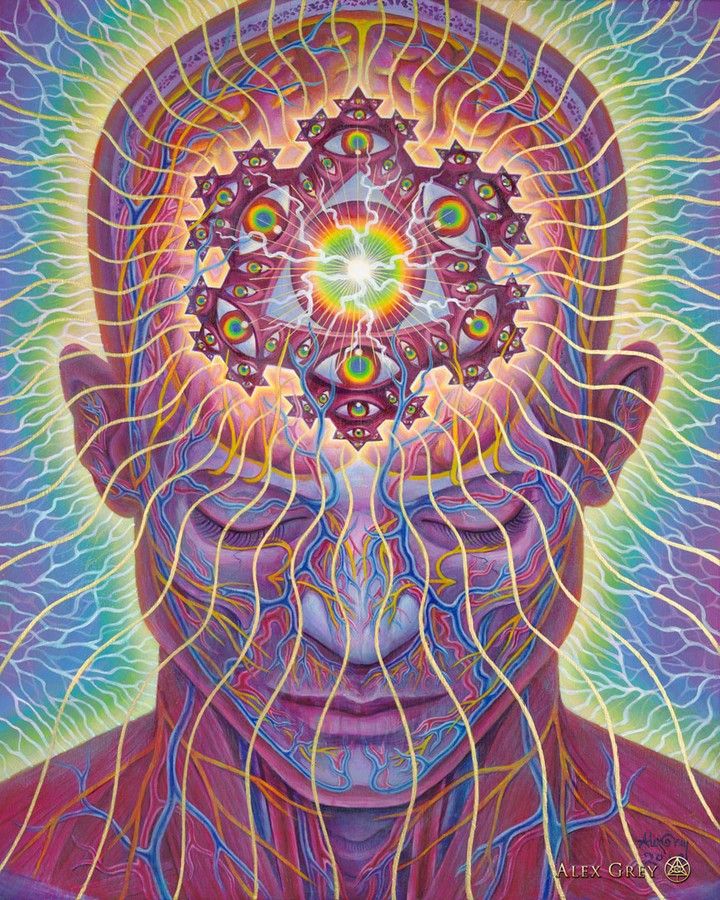 Reminiscing on some of the breathtaking, fascinating odysseys I took into my mind while smoking THC, which I compared to what Dr. Carl Jung described as active imagination states, I wonder if they were rudimentary trance journeying development stages, where my mind was beginning to explore these experiences, but because it was only just beginning to open, not much came of them but exotic (and often comedic) mind visuals - not much was delivering profound insight.  Then, as I kept smoking, they became less inspiring, and ultimately a total mess of weird psychic input and distortion - smoking THC became little more than a bad trip, where I would need someone to talk me down, among other things, to chill out.  In fact, the last time I tried THC, it started off with a helium-style voice chirruping "BAD TRIP!  BAD TRIP!  BAD TRIP!", proceeded by extreme mental confusion, anxiety from outer space, and visionary input that was extremely chaotic and unpleasant.  So THC was something I said goodbye to, at least for now, and CBD, which I recently discovered I can enjoy, became a healer for me.

But from what I know about the "shamanic initiatory crisis", which is a kind of spiritual emergency that I think what I have gone through at least mirrors, the old self has to be broken down and basically reinvented for the new self to step forward, sometimes with interesting spiritual abilities that come of it.  I would imagine I am over the worst of it, and am stepping into the light.  What once felt like two steps forward, one step back, now seems much better than that, and though things are rather gradual, I seem to be doing a fine job healing myself.  The Akashic Records were something I only just opened to in 2018, so I imagine that if I come to experience trance states in a refined way one day, I will get some amazing downloads from this source now.  I am just not sure, if I have refinement of these states coming, how I would enter them and remain grounded.  Maybe I would be able to do THC again in a later stage... I am not jumping to try anytime soon, right now is a time about healing, more than anything else.  Psilocybin is something else to consider, but I am concerned that if a trip is bad under psilocybin, I would have to wait a good 8 hours to get out of it - the good news about bad THC trips is that they only last up to a couple of hours, usually.  Mostly, I am concentrating on prayer and meditation, and psychic input in sober states... if trance states are to be something I witness again, I want to be prepared for them.  No more mental hospitals, please!

Man, how I used to love listening to silly techno trance music while exploring this psychedelic phenomena - one of my faves was "Born Slippy" by Underworld, which now has a special place in my heart as a song that I played repeatedly when all of this began.  Something about certain electronic rhythms puts my mind into an otherworldly headspace... if melody is attached, and it hits me the right way, that just adds to it, inspiring the mind to go into itself and explore.  I find electronic music more powerful for invoking altered states than using a traditional drum, because the sounds make it more ethereal, which just increases the depth of the experience.  A faster, steadier rhythm is also more exciting to me than a slower one.  Usually, trance music has shitty lyrics, but that doesn't matter because I don't usually listen to lyrics when I play a song, anyway.  I just ignore what they mean, treating them like just another instrument.  Poetry isn't something I'm invested in because 9/10 times a poem's message goes over my head, due to the way that I think.  I simply can't hear what the English is telling me when it's structured like a poem, and that includes musical lyrics.  Pulp is a band where I understand what the song is saying, because they tell little stories in their songs... but when it comes to most bands, please don't ask me what a song is about.  Usually I'm confused.

Good news from my psychic mentor - he got a new store location, and it's 4 times bigger than the last one!  Also, I deduced that the Vishnu forehead marking symbol was actually representing Krishna, so for the sake of experimentation, I am uttering a few more prayers to Him again.


(Honestly, this is the only kind of stuff I tended to listen to when I tranced out.)


(I would also very much like to trance out to this song!)