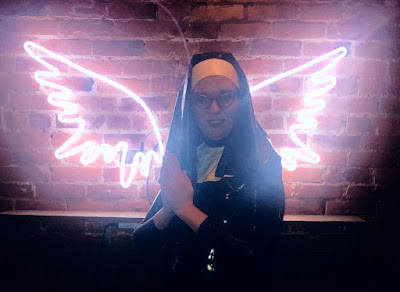 Well, I'm getting a lot of writing done on here, so I'm considering that perhaps my next major creation might not be visual, but instead a novel of some kind.  It may even be writings based on what I'm producing on this blog, except that I feel I must come to a new level in my healing and transformation before I'm sure of what that would even look like.  I may adopt the Sister Penance persona and produce something full of spiritual musings - perhaps a book that physically presents as if it were a fetish fantasy novel based on the cover art, but is actually mystical writings and esoteric articles.  Again, I think, if this is something that I do, I wouldn't just drop the blog articles into it verbatim, but I might lift quotes from it.  I have to see where the mind takes me, to organize my ideas better.  Something is feeling increasingly stronger in me, and I have to witness that play out first.

I don't feel the comic format is correct for anything I want to creatively say or do next - maybe I will return to it one day, but right now I would rather just write.  I kind of have a style that in many ways reminds me of my favourite band, the Pet Shop Boys, where I am both flippant and fun on the surface, but beneath all of that I am smart and wise as well, or at least I aspire to be.  This is true for my comic work, as well as my presentation.  I may still make kitschy Catholic art, but I wonder if that might not just be some little thing I do here and there, and not a major project.  Sort of an ongoing thing... a book might be more realistic as a big new project that could go somewhere.  I will likely self publish with some online service, and see where that takes me.

Sad news from my psychic teacher - sounds like COVID-19 killed his shop, and he will be shutting down at the end of the month.  I will have to drop by and find out further details.  I am not sure if he will be reopening elsewhere, but he is a good contact I found and at the very least he helped boost my confidence with my skills.  He is known as one of the finest psychics in the city, has been at it for most of his life, and told me he only takes on readers he believes in, and he's only ever taken on a few here and there to train, so it's an honour he chose me.  I am still training myself - if there is a neurological issue, it may be complicating the channel a little, clouding it, until it is resolved.  I do not wish to jump the gun as a professional and risk making myself look foolish, or hurt people with shoddy information.  I believe in providing a quality service, and right now I don't demand money, but will accept it when it's given to me.  Technique recently improved again, and I think it's just going to keep getting better.  I have a unique way of reading the cards that even my mentor says is so unusual, he has never seen anyone read like me before, so at the very least that part is novel and unique to me.

I'm probably back at work soon... the downtime was a lovely experience for me, and I got to work more on my healing.  I know it was stressful for many, but I had a good time.  Learning to live on a budget as I have has taught me great resiliency, and the resulting introspection that comes of not having much money to engage the world for entertainment's sake has led to greater self awareness.  It was a luxury to have the mind that I do during this pandemic - I did not go mad from being trapped at home most of the time.  I hope, however, that we can bounce back from all of this, sooner rather than later, regardless of how karma wants to play out.