New Catholic punk item I made! 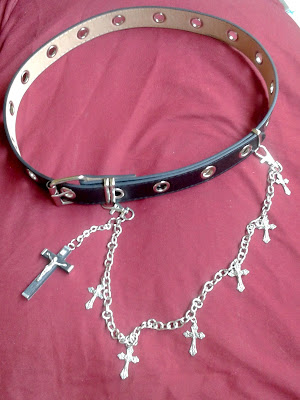 Yesterday I bought the basic belt pictured here for less than $10.00, thinking I could modify it with crosses and give it the same treatment I gave that goth collar I bought a while back.  (I had seen a picture of a girl with a chain belt with crosses hanging from it, and decided to make something similar to that for myself.)

So I hit Queen St West's bead shops and bought some extra chain, mini crucifixes, links, and the bigger crucifix.  After a bit more shopping, I got home and put it all together, the result being what is pictured here.

I was talking to my rosary coven about the kind of look I am trying to go for - sort of a classic punk look, with a wayward schoolgirl style sometimes added (with kilts and cardigans), a bit of goth, and also - something I call "Vivienne Westwood goes to church".  I was trying to Google image anyone with a similar aesthetic to what I have pictured in my head, but photos were few and far between of any alternative dressers with rosaries and crucifixes.  All I know for fashion is - I recognize what works for my style immediately when I see it.  When I was a teenager, I wanted to go into fashion design until I realized how pricey it is to get into, and how unbelievably square most of the industry is.  So fashion is something I just play around with for fun, making stuff like this.

I want to mention briefly something I was going to write a separate article for, but it fits nicely with this one because of this new item I made.  I find reappropriating the Catholic faith, as one example, into a more progressive, queer friendly, feminist, empowering version of the religion, in both personal practice and in donning attire like this, much more beautiful and enriching than rejecting it outright in favour of something like adopting satanism.  Of course, in my case, it only made sense, having religious problems that required intervention from Divinity.  But while so many turn away from God entirely because of how shitty mainstream religion can be, turning instead to Satan (regardless of whether or not they actually believe in the devil - some just admire him as an idea), I find it ludicrous, especially for people who identify with left wing politics.  Yes, the church is full of toxic masculinity, but Satan is the KING of toxic masculinity, so to look to him as an image representing favourable human qualities, you might as well make Hitler the poster child for vegetarianism.  I may sound like a religious nut making that comparison, but keep in mind I was oppressed for over a decade by a satanic demon, so Satan is a name I don't appreciate.  I don't tend to talk too much about this with many except others who are either Christian or in some way religiously empathetic, I know how bizarre it sounds, but I hate Satan like any mystic who has ever been affected by diabolical forces, because of what happened to my life.  So The Satanic Temple, as well intentioned as they may be, look silly to me, especially in the way they conduct themselves.  They seem rather tasteless when I read some of their tactics, and even LaVeyans don't think much of them.  I can be virtually on the same page with many of their ideas without liking their aesthetic because of what it suggests to me.