More feelings about the use of restraints... 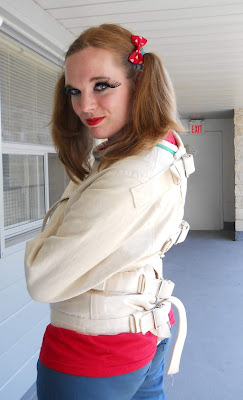 It's no secret that "Asylum Squad" is peppered with bondage overtones... that's part of the draw for a large contingent of its readership, I suppose.  I'm going to be opening up a little bit for this article: I am a person who enjoys bondage myself, but I am completely asexual about it.  Restraints are power items that bring me comfort and some mild romantic feelings.  I feel confident opening up about this because bondage is such a common fantasy thing for people... for me, it's a bit different - it has been a fun thing to play with, but it's also been a safety precaution because of what I have been through with my health.

I have been in institutional restraints probably about 6 or 7 times (I have lost count) while in hospital, usually because I was being self-destructive due to the torment in my soul, once as an extended punishment at CAMH for putting a mattress against my door while staff were making annoying faces at me through the cell window.  I have come to a point now where, as a bondage person, I am frustrated with my feelings, because they are mixed.  I wonder how many other people who have similar feelings, who have been restrained repeatedly while in hospital or prison, have also began to feel mixed things about what they do privately.  It seems I can no longer wear bondage without some kind of flashback to the abuse, where I start to get very self conscious about what I am doing.  I am not even quite as interested in it as I once was.

It was ok at times in hospital when staff were gentle about it - it was not frightening or upsetting, and it helped me to relax when I was panicking.  But when I was violently handled, it did something weird to me, and I have not been able to move beyond this.  It robbed me of my humanity for a while, and I was strapped down in such a position for so many hours that the cramping was unbearable by the end of it.  My wrists and ankles were black and blue the next day, which was embarrassing to explain to a visitor when she came to see me the following afternoon.  Restraints are no longer that "erotic" to me - I have a set, but I use them to go into a calming psychological headspace for when I feel like I want to self-injure, it's not as enjoyable in any other respect as it once was.  Of course, not having a partner, it's not much fun anyway, so maybe that's the other reason.  But living alone, it's a way of being held when there is no one there to hold me, during a bad day.  (Fun fact: Rather like Cath Schneider in "Asylum Squad", I once taunted the orderlies while they roughly handled me, just to make them feel uncomfortable about it.  Later, one of the same orderlies seemed oddly happy to see me in the corridor while on a pass.  Perv!)

I am owning this part of me, and have used it in activism, throwing it back at psychiatry as a kind of reappropriation thing both with the art in the comic and with bringing my strait-jacket to Mad Pride rallies, as a kind of taunt to CAMH for using restraints abusively on people on a daily basis, bringing attention to it.  I am not sure certain Mad Pride activists have appreciated my playful political taunt, some have been abused far worse than I have, so they fail to see the humour.  I have come to a place, when I reconsider the state of mind I was in, where I am not completely anti-restraint in hospital (because I feel I needed it when I was in danger of seriously injuring myself), but I feel there needs to be finer regulation, some greater patient consent to it, and certainly nothing like what I had to endure for hours and hours on end, when I wasn't even doing anything more than trying to get some privacy.  People have died in hospital because of extended use of restraints, or poorly applied ones.  So I guess my views are a bit controversial, only because I have seen the worst of what can happen in my own mind, not just because I have powerful feelings about bondage.

I do feel if I had had someone to hold me down or tie me up at that time back in 2012, when I was severely unwell, I wouldn't have attempted suicide.  It's been like walking an endless tightrope for the longest time, trying to stay safe, and I was fighting for my life every minute of the day for years.  That day was a weak one for me, and I almost lost the battle.  Thankfully, it seems the really dark times are behind me, and with time things are growing more and more positive.

It's possible I just need to give my healing more time to get past my awkward feelings about restraints.  It's a bit of a bummer, the superego tends to get weird with me over this sometimes.  I wish things were better in many ways - screw having a yacht.  My idea of success involves owning two bald cats and a padded cell.