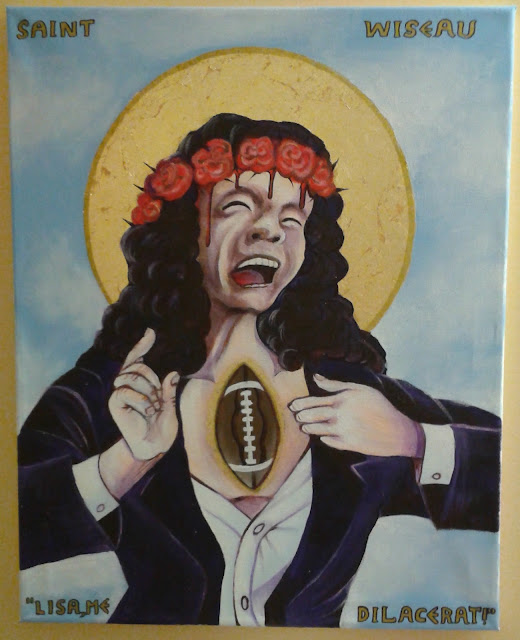 I might tackle minor details here and there if I get the urge again, but here's the finished St. Wiseau painting, as it stands.  Because I haven't kept up a painting momentum in a while, I feel this piece is lacking somehow, and I don't even know how.  I don't think I captured him perfectly, but it's kind of a kitschy piece so I guess it works well enough.  I have decided, as one would expect, that St. Wiseau is the Patron Saint of bad movies.  Students of film can pray to him to avoid making similar mistakes in their own movies, or perhaps pray that if their films end up being terrible, they can at least become a cult indie hit.  (I tried to get my analyst into "The Room", but he couldn't even get through half of it.  I was hoping we could analyze Tommy's psychology a bit through studying the film's symbolism, like the tossing of the football, which I think is his idea of male bonding, but also a way of trying to convince the audience that he's "all American".  My analyst said: "Sometimes it's just a really bad movie, and that's it".)

Maybe this could be a part of my "Holy Blasphemy!" series... canonizing unlikely people on canvas.  I was considering R Kelly but that might be pushing it because he's a total fucking pervert.  I'll have to keep thinking about it.  ("Trapped In The Closet" is still trash gold, though.)

Wondering what else to paint in general.  Thinking I might do one of a blue collar lolita girl, with a Teamsters style My Little Pony jacket.  I was into lolita for a while when I was in serious spiritual pain and trying to play with Harajuku fashion to have some fun, still have outfits from those days, but I found the crowd into it insufferable.  Privileged, boring, young rich white girls who discuss nothing but brands.  I was the long in the tooth one who worked a low brow job and could only afford low brow stuff, compared to them.  Screw that.  So I want to paint a crusty lolita girl smoking pink cigarettes, donning a blue collar union bomber, and looking like a kawaii culture outcast.  I am bored with countercultural things that seem based strictly on image.  I like punk because it's timeless, and often has something to say.  Goth done right is nice, too.  Although I like the look of it, I see nothing truly punk about Steampunk.  It should be renamed "Steamgeek", since it's based a lot on fantasy stuff.

Time to crack open a brewski and figure out the rest of my day, now that this beast is finished.  Maybe I can sell it to someone desperate.