My writing style: How it evolved... 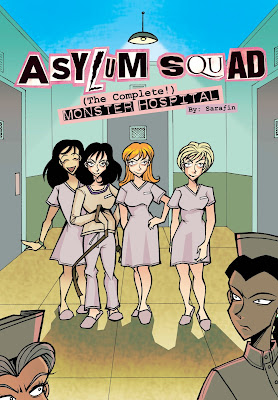 Time for an article on my comic writing style and how it evolved, growing to become what it became.  This'll be a breakdown of my creative journey:

The original "Asylum Squad" comics were highly amateur, rather insulting, "animu" type shit that I came out with shortly after high school, when I was just fucking around with a silly idea, and not really giving it my all.  I still have many copies in storage that I don't know what to do with - they might get shredded or go up in flames someday, as I don't want to sell them or even give them away... I find them highly embarrassing.  Still, they were the prototype, and there was something to the general idea of mentally ill superheroes that I was enjoying, so I didn't fully abandon the loose set of ideas, though the series would drastically change in many ways with time.  I quickly came to learn that I was never going to be a real mangaka, embraced it for what it was, and decided on a revamp.

The art improved, but the writing still had a long way to go.  I actually have an unpublished graphic novel that was "v 2.0" that will never see itself to print, because I find it pretentious as hell.  It was basically the same story, only with a slicker look, and I had clearly not understood myself or the mental health system well enough at that point to truly have anything relevant to say... I had not suffered enough yet to wisen.  Fortunately, for my writing at least, suffer I would, and so I later returned to comics with something highly warped, but much more interesting.  This was "Asylum Squad Side Story: The Psychosis Diaries".

That book was a training grounds for getting my mind back into making comics, but because I was so frail at the time, I decided on an "arthouse" experimental underground comics format that was almost more like a zine than a comic, so I didn't need to focus on cinematic flow when I was not sophisticated enough as a mind to execute it.  This book was also a big, cathartic purge for my psyche, to help me to process things I was going through, and to blend it with pure fiction, to experiment with storytelling in a kind of stream of consciousness type of narrative.  As a plot, it structurally sucked, and though many people still loved it, it is also considered a very emotionally heavy, sad book, and all those I know who read it had to do so incrementally, for it was an exhausting read.  That was kind of the point, to make it wordy and overwhelming, to help people to feel the weight of what I was trying to explain.  I see it as a work of art rather than a comic in some ways... I was having a phase where I was really into being an art world indie kid and I was listening to a shit ton of dream pop and shoegaze, so that kind of added to the weird dreamy aesthetic.  Finishing it, after the retraining and catharsis, I wanted to embark on a finer piece of comic work, and returned to cinematic storytelling with the plot based comics.

Ty Templeton, a comics instruction guru and working professional, helped me to learn the art of crafting finer comic writing, and his courses were worth every penny, as he described formulas he uses to draft effective plots for commercial comics.  He also ended his writing course with the instructions to take his rules of writing, and to break them - to know the tropes, and make new of them with interesting variations.  Looking back on the original work, and what was fun about it, I revisited the superhero piece, but this time in a way that would work for the new world I had created, one that was much more serious.

I aspired to create brilliant satire that would be packaged as something fun and pop culturally appealing... I am not sure how this series will go down as something of brilliance, but that was the goal.  I have a knack for knowing elements that make for a fun story, so I had to consider how I would weave an important message into something that was also a joy to read as a comic book.  It was tricky for the longest time, as the message wasn't initially clear, only that I knew it had to do with spirituality and how the mental health system is full of holes.  I consider this a rather punk comic, because of the tone and attitude in it, and the fact that it's very political with Mad Pride adds to its punk appeal.  Sometimes, when I try to break down what the plot is like, I say it's like a raw combo of "Girl, Interrupted", "The Breakfast Club", "Sailor Moon", "Scott Pilgrim", and "Inception" - and sometimes, "Nightmare on Elm Street 3: The Dream Warriors".  (I do not like it when it gets compared to "Sucker Punch".)

I've mentioned this elsewhere, but because the "Jung Ones" arc was so over the top, I felt the epilogue had to amp it up to 11 in some way again, so that the story didn't end on a boring, low note.  I worried that people were thinking the comic became a drag after the Anja Project, and with that part of the series being very cinematic and wild, something needed to come into the plot to make the overall story worth reading, perhaps even for a second time.  In fact, I wonder if it reads better once you know what the ending is?

I am going to have to sit down with all the published books again and see how, in one sitting, everything flows, once that final graphic novel is in my hands.