A new idea for an art series... 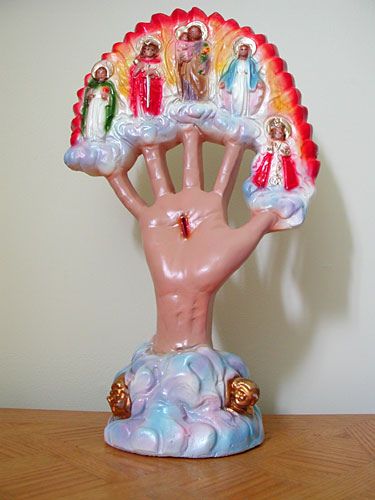 My muse might be waking up again, sinners!  I just came up with a fun idea of what my next artistic theme might be, and I wanted to share it:

I often see odd looking Catholic kitsch at thrift stores when I go to scout for interesting things, and it hit me today that I should consider buying some of it and upcycling it as surrealistic works of art.  Maybe there's some weird Virgin Mary piece I could give an interesting collage treatment, or a statue of a patron saint I could decorate with paint in some way, giving it irony.  I have sort of touched on this a bit with the decorated goth collar, the Our Lady of Guadalupe jacket, and the Sister Penance shoes, but it could be an ongoing theme.  I am really into pop surrealism, paintings by Mark Ryden, for example, and I would like to take pre-existing kitsch and run it through a strange surrealistic filter to see what I could come up with.

I am sure this kind of thing has been done before, but seeing as very little is truly original in this world, I want to explore what I could personally do with it.  Maybe the theme could relate to what is truly sacred, in the guise of looking slightly "blasphemous".  I like the name "Holy Blasphemy!", and this might be the name of the series, if I decide this should be my next project.

As a campy fag hag, I find that there is often a fine line between good and bad taste, and I want to explore it.  It would be fun to take some of this strange stuff and reinvent it to have meaning beyond mass produced religious objects.  I have mentioned it elsewhere and already several people think it's a great idea.  If done right, it could appeal to both devout Catholics who are a little bit eccentric, as well as atheists who love to collect weird religious things.

(BTW, the Sister Penance shoes need a good soldering on the loops to stay latched in place - one time when I wore them out, they became unlatched and I had to fix them.  They may end up being just an art piece, at least for a while, because of this issue.  They also kind of kill my feet, because I am not used to wearing heels - eek!)