"Asylum Squad": Why I chose the ending I chose (instead of the alternative)... 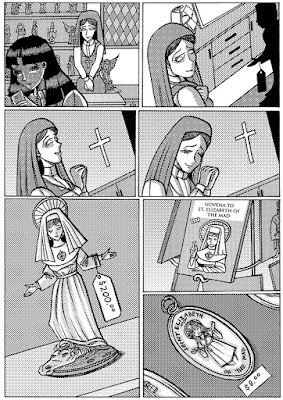 I'd like to share a statement article on why the ending I used for my comic was chosen, as opposed to the one that was initially planned, where the two boarding school boys using the ouija board were talking to what looked like the horse demon, in another part of the world:

So, the first ending was one I thought was going to work, a while back, when a lot of the story had yet to be constructed.  It seemed to have a mystique that I liked, which suggested some truths to the idea that spirituality was a real factor in Liz Madder's psychological distress, and that it was not just a delusion.  But the problem was in that it was vague, and I couldn't find satisfaction in its conclusion.  Something was left too loose and too up for interpretation for me, thus not likely to satisfy the reader, I would imagine.  It meant it wasn't really making a statement about anything, it was just eerie.  Around the time of my father's death, it was very hard to focus on finishing what I was doing with the comic, and the fact that I had this ending that I didn't believe in made the home stretch really difficult to complete - I simply was bored with it.

About a year later, during the remainder of my hiatus, the new ending popped into my mind randomly as a kind of joke, thinking about how funny it would be if she turned out to be a canonized Catholic saint.  I snickered - then, my channel began to speak through me, encouraging me to consider this the ending, once I had tweaked it a little more.  I had to go back in the comic series and re-read all the Catholic overtones that appeared in the books, to see if all tied together well.  There are various scenes that almost seamlessly act as runners in the narrative to suggest her future in the church - among them are the crucifix falling from the wall as a supernatural hint, the exchange between Nurse Thora and Liz with the Bible, the dream sequences, and of course the library scene in which she invokes an angel through her plea to St. Dymphna.  That scene with the angel transforms from being perhaps the hallucination of a madwoman in despair to a relevant mystical encounter in one panel, when the comic concludes with the painting I made, thus turning everything upside down, and making a mental health story into a novice mystic's coming of age character study.  The statement at the end, as well, as she lays flowers beneath the statue of St. Dymphna, makes relevant commentary about what I feel is lacking in modern mainstream psychiatry - understanding of the soul, and working with it properly.  It is also a statement about hope, which is something I feel is lacking in the prognosis people are often given in psychiatric treatment.  The statement was intended to be subtle, not pretentious, and I hope it was delivered.  So yes, Asylum Squad is a mental health comic, but at its core it was written for people in spiritual distress, and ultimately, that was my prime target audience.

The ending took a while to find, because I had to find myself to understand fully what it was that I was trying to say.  Thankfully, despite things I might have changed were I to write it again, I think it all came together well.  Sorry it's taking me such a long time to get this final book together - because I became ungrounded recently, I have taken to working once again on levelling out and feeling my art once more.  There is so little left to do to put the files together so it's rather absurd that it's taking this long, but my mind is still concentrating on my soul a lot.  The Spirit encourages me to get back to my art, and to stop being The Hermit.  I promise it will come out sooner or later, and my goal right now is for the late spring.