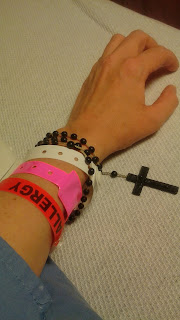 Another premonition came true!  I am now in a psychiatric unit in a general hospital.  I am happy I am getting more psychic, I am disappointed it had to play out this way.

On Tuesday night, as I was trying to sleep, I kept getting roused awake by something, and was urgently advised to call for assistance.  So I dialed 911, very nervously, and had to deal with a shitty operator.  Two cops came and escorted me to CAMH (no handcuffs this time - too bad, the blonde pig was rather attractive!) and I was voluntarily admitted.  The ER was pandemonium and it took a very long time to get my own gurney to lie on - this is getting much worse with time at the CAMH ER.  Some of the raunchiest men cussed and cussed and I got no sleep for 48 hours.  I had the choice of waiting up to several days in the ER for a room on the CAMH Women's Ward, or to go to another hospital.  So I chose to accept the bed elsewhere.

This ward ain't the prettiest but the staff are quite nice and it's less oppressive than other mental wards I have been on.  I went because of a looming feeling of something coming, a sense of dread, and the worry of being alone with what I sensed.  It seems psychiatry is actually listening to me more - they are not shooting down my theories, they seem to acknowledge my ideas a bit better.

I think Spirit wants me to be in here for something that is coming.  Not sure if it's an altered state where I'd be vulnerable without help or what - I guess we'll see if this is a false alarm.  The Anglican Druid is coming tomorrow with snacks and a pair of headphones, which I didn't bring.

Hospital Hack: Order the Halal food instead of standard meals because it's slightly better food!