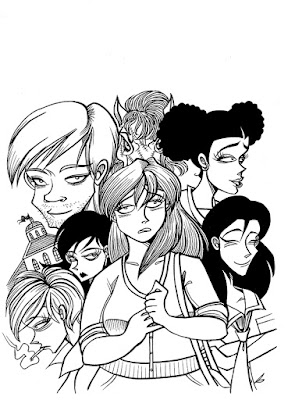 So here are the inks for the next cover - the collected book is to be called "Asylum Squad: (The Complete!) In Solidarity", or perhaps I will just call it "Asylum Squad: In Solidarity", as there will only be one book of this portion of the story.  I am going to likely get around to colouring this cover on my computer soon, and I will then proceed with all the inner workings for the graphic design before putting the files together to get to my printers.  They graciously do all the In Design work for me, as I don't know how to do that, so it takes time for that to get done.  So I expect a spring release book launch for this novel.

For this cover, I decided on a montage of characters from this part of the story.  Trish Adams and Josh Lyon made the cut, as did our protagonist Liz Madder (of course), the other members of Squad, and Armananstantanu.  I did not include Anaya Gupta on here because she's kind of a spoiler - the Squad isn't, because it's presumed that they get back together anyway, because of how the story is structured.  The tower of St. Dymphna's Psychiatric Hospital is also here, to suggest a return.  I think I will have a kind of evening lighting to this cover, and I want the moon visible at the top, which I will add later.

Often my comic is compared to that Zach Snyder film, "Sucker Punch", which makes my eyes roll back in my head so far I can see my brain stem.  That movie was basically a music video trying to be a video game, and I was stunned that something so over the top and pretty could be so dull.  Yes, there are some mild similarities, but I actually think that parts of my comic in some ways are more like "Nightmare On Elm Street 3: Dream Warriors", a much more fun piece of camp.  Also, those elements of the comic came before "Sucker Punch", so it's not ripping that movie off, and I must have unconsciously included like elements of the latter film because I didn't even see that until after "The Jung Ones" arc was completed.  I like to think of it as its own thing - certainly it has elements that are similar to other pieces in it, but it's like those elements were mixed in a blender to create a new flavour.  There are enough mental health related comics out there, but very few talk back to the status quo of how we frame what we call mental illness, and about how messed up the psychiatric system is right now.

Maybe "Asylum Squad" came out at a time when people were not ready for these kinds of ideas... maybe I am ahead of my time, I am not sure.  It would be cool if it had been a bigger hit... then again, I shy away from promoting myself, I feel arrogant in doing so.  Fame is also rather daunting when it goes sour.