Christ minus Christianity: Re-exploring my ideas... 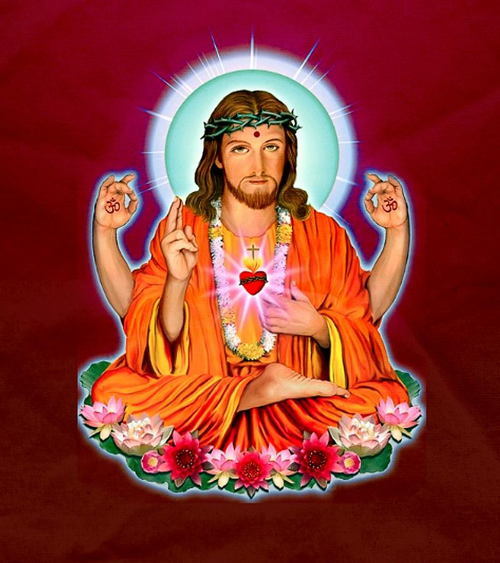 I have stated on here many times that I identify as a "folk Catholic", but I have also had days where I wonder strongly about that, and today is one of those days.  I understand it is true for many seekers to try many things along the path to self-actualization, and once again I am exploring the possibility that I am not truly Christian after all.  Here we go:

I know that Christ is a power I work with, but I just can't shake the idea that I see him more as an avatar, like Krishna or Rama, rather than seeing him through the Christian lens as the one and only "Son of God".  I just like Indian spiritual ideas better... always have.  I also like the idea that the real Jesus was the prophet Isa, there was no ascension, and that he was buried in Kashmir, India.  Knowing what I know the church would want me to believe, I am questioning my ability to conform to a Christian set of beliefs, because my ideas aren't on board with many of theirs.  So why was I falling in love with Catholicism in the first place, especially considering my politics, and my rebellious nature?

I love the Christian saints, many anyway, and I have had several accounts of powerful Christian mystical experiences, such as the levitating rosary, the transmuted rosary, religious ecstasy, and successes with using Catholic objects in fighting my demon.  Also, because there was a sinister demon inside of me, and I think many others would think this as well, what else to do but turn to Christianity - Roman Catholicism to the rescue, right?  Because of how powerful these things were to me, this became a strong draw to devote attention to this faith, at least on some level, because it seemed to be calling to me.  I love cathedrals, not just because of the art, but some feelings I get being in them.  Coming from a Christian upbringing, what's a white girl to do but assume I have a calling?  Yet, I can't shake that I prefer eastern religious ideas in some ways, and I know that indigenous spirituality has also really helped - the Four Sacred Medicines were important to my growth and healing.  So, I guess I just have a calling in spirituality, not necessarily religion... that is my conclusion today.

I think I needed a religious phase to get to a certain level, but beyond this, I don't see religion serving me much further.  My fear was that if I said "I am spiritual, not religious" I will look like just another boring white person with flakey ideas.  I thought, in my mind, that calling myself religious implied a higher level of devotion and commitment, and that calling myself "merely spiritual" seemed to shy away from this.  But now, I want to branch out again, and become spiritually exploratory, taking what I learned from religious practice and using it in a more experimental way than perhaps religion would want me to.  So, I think religion served me well to learn things, but now I am probably good to graduate beyond it.  Sort of like training wheels, to get me going... they might be coming off now.

So yes, I am a friend of Jesus, I will still pray to Him, but to others as well... I love many aspects of the Divine, I can't just love one.  I will still go to churches, I will still practice religious ceremonies, but I want to keep exploring... religion may restrict me if I conform too much.

I might head to BAPS tomorrow, which is the big Hindu temple near the airport.  I want to re-examine Indian spirituality again. I have never been to this temple, it is absolutely breathtaking, and I need to go at least once.  Not going to try Hinduism on again, but it's worth exploring practice from it, and knowledge is always good.