Why I chose the comic format for "Asylum Squad"... 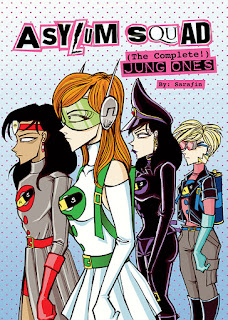 I have been asked about why I chose to write "Asylum Squad" as a comic.  The simplest answer is that I grew up reading comics, and had a desire to create my own series one day.  (There's a more complicated answer coming, but I'll get to that later.)

Growing up as a child, I read "Archie" (haha), "Garfield" (heh?) and stuff like that... I really enjoyed Japanese anime and manga after I discovered "Samurai Pizza Cats", and later "Sailor Moon", the latter being an obvious influence in my work, as "The Jung Ones" books demonstrate.  I would also experiment with my own comics and little animated films, which I began to create around the age of 8.  Nothing terribly high brow about some of my choices in the comic and anime world, but other more intelligent works influenced me as well later, as I got older.  I also wanted a kind of "Tank Girl" vibe in some ways with "Asylum Squad", Jamie Hewlett is sort of an influence to some degree, as is Jhonen Vasquez, but maybe only slightly.  I like Vertigo titles too, stuff by Neil Gaiman, and some Alan Moore.  I also love independent graphic novel memoirs, like "Persepolis" by Marjane Satrapi, and I had a phase where I collected a lot of mental health related comics.  I have to admit, I barely read any comics right now - I kind of feel odd doing so since I am not even sure if I will make another series ever again, but I do love and respect the medium.

I wanted to do "The Psychosis Diaries" as a kind of indy pseudo-comic project, because my mind was not in a state to be sophisticated enough for a cinematic experience on the page, so I did an experiment to use as a template as I retrained my mind to think that way.  Eventually, as I got my footing again with the process, the format of that book proved to be limiting, and so I prepared the next body of work after taking some Ty Templeton comic classes to improve on things I had already understood long before my mind went odd.  This aided the plot piece in being more cinematic, and helped me craft a plot that was functional.  Obviously, "The Psychosis Diaries" is not really a plot, it's kind of a stream of consciousness thing - both content and presentation mean I don't wish to present it as something that represents my current work at this point, but I don't disown that I created it, it feels important and it's something a lot of people enjoyed, even though I also hear people say it's a painful read to get through.

I chose the comic format over, say, the novel format, because I wanted to create pictures as much as I wanted to tell a story, so comics seemed like the best option for that.  I seem to have a knack for cinematic storytelling, something a couple of teachers have told me, including a storyboarding one at a course I took at OCAD, when I took a continuing education class in that subject.  I don't even do thumbnail sketches to prepare a page in the process - I have the script, and I plot the page as I pencil it.  Maybe this method is not super professional, but unless a page has a complex layout, I tend to just skip that part, figuring out the action in my head as I go along.  I can visualize the way the action must play out on the page, deciding on the beats needed to carry the story forward, without overdoing it.  The trick, I have learned, is to draw it in such a way that if someone didn't speak English, they could still piece together loosely what is going on in the story with the art alone.  I am not really cut out to work for Marvel or DC at my level, but I have no desire to do so anyway, and what I have going seemed to serve this as an indy piece well enough.  It's not super slick, I know that structurally the art has room to improve, but at this point, it's not dreadfully amateur anymore either.

Part of me also wanted to get into film, but because of the limits of what I could make on a budget of virtually nothing, comics is a close enough cousin that I can almost create the same experience in book format.  Storyboarding is not exactly the same in some ways, but is very close to comics, so there is a similar method involved in their creation.  If I were to work in film, I would choose storyboarding as the department I'd pursue a career in, but personally, I am so worn out I don't think I could bring myself to consider even that as a job at this point.  Animation, especially, is a cutthroat industry that sounds so toxic I can't imagine being involved in it.  No wonder so many animation studios have bars in them... animators are notorious alcoholics.

I wonder on and off if I will make another comic... it's possible, but I do need to take a break right now.  Sometimes I go to the Toronto Comic Jam and make mini comics with the others there, but I have no major plans at this point.  The idea of a comic based on my journey is a possibility for one day, but I feel the journey is still unfolding, and I want to feel in my gut that it would be right to proceed with something like that.  In the meantime, I might make a costume or painting here and there, but visual arts is not my top priority.  I will, however, keep writing, and this blog serves to present those works.