The aesthetics of "Asylum Squad"... 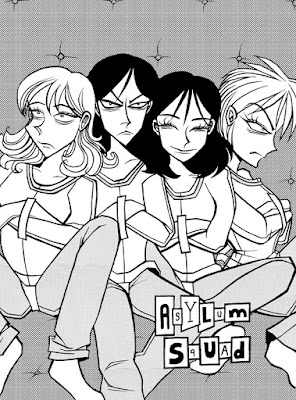 Thought I'd follow up from the post about why I chose to make comics with one about why "Asylum Squad" has the pop "manga" aesthetic I went with, instead of something perhaps a bit more serious:

The most obvious reason for this is that the aesthetic is a remnant of what little actually worked from the original prototype version that I wish didn't exist.  The idea of lunatic superheroes was something I played around with during my anime obsession days, when I was on antidepressants, not sure of who I was, exactly.  After the almighty shitstorm of what came of me, I simply couldn't follow through with the original concept, because there was a second version I was working on that basically was the original version, but amped up visually.  Something in that narrative couldn't serve as a message anymore, with what I had come to learn of the system I was in, and of the experiences in my mind.  But I still wanted to hold onto that campy, fetishistic, superhero, loony bin vibe that made the original rather fun.  But, after "The Psychosis Diaries", how was I to achieve that?  It took some writing classes and strong consideration of what the mythology of my comic's world had become, to figure out that the only way the surreal superhero kitsch thing could work was in dream sequences.  Hence, the warped Jungian drug trial, the Ajna Project, came about.

As I said before, psych wards are often romanticized... people love a good asylum flick, I have some idea of the kind of stuff that sells.  When I log onto my DeviantArt account, I notice my stuff often gets liked by a lot of insane asylum bondage connoisseurs, which I don't disprove of, as long as the conversation is respectful if they engage me about my art... I don't frown upon that kind of thing at all, I understand it well.  In fact, along with medical professionals, people in spiritual crisis, and psychiatric survivors, this is a target audience of mine.  (And, with the ending, perhaps even Roman Catholics would like it. )  Part of what I was going for with the new version was the old 70s "women in prison" exploitation vibe, it suggests an ode to smut, but is smarter than that, and of course is subtle about it.  It's "bubblegum satire".  It's revelling in the aesthetic of psychiatry as it has been presented in film, while simultaneously knocking the problems with it as a practice.  It's a great way of getting people's attention about an important message I have about the way the system is, and what we might not be getting about the mind... and, it's more fun to create it this way than something more serious.  The Ajna Project arc is also so ridiculous that it's suggesting how absurd practises and ideas in psychiatry can be, often enough.  And, because of how absurd that arc is, an over-the-top ending seemed to be required to tie things together so as to satisfy the reader enough, because of how real world and dry Liz Madder's life becomes for a while, after the Ajna Project.

It's still a bit of a wet dream of mine to see it animated... not sure if this would ever happen, but I imagine if it did, it would work better in that format than as a comic, with the right studio.  I'm still satisfied enough with what I made that I am glad it was created, even if nothing else moves forward with it.  The satisfaction of crafting a completed series means enough, in some ways, at least at this point.  I developed a bit of a cult following, so that's cool.  Sometimes I thought I'd never get it done, but in the end, I completed it, and for that I'm glad.

Now I just need to get that last book out, once I've completed the inner content, cover, and after I have saved up for the printing.