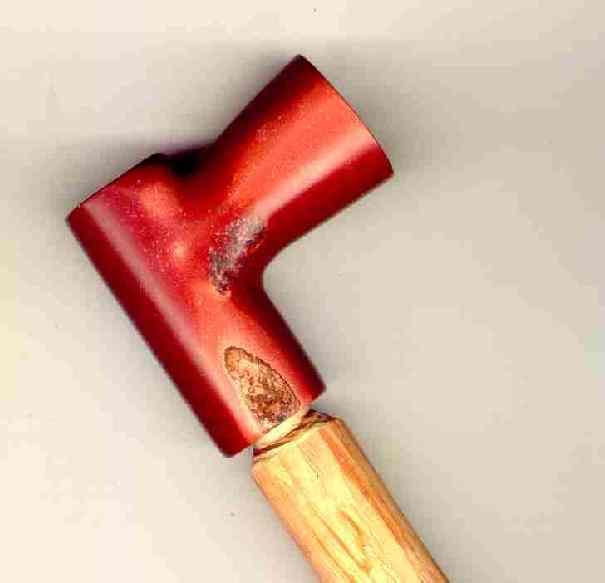 The prayer pipe (not the peace pipe, as it has mistakenly been called) is a ritual I have done in native circles only a couple of times, and I guess is the way most honkeys assume tobacco is used in indigenous societies.  Though I can't speak about all the ins and outs of this practice, I want to talk a little bit about my experiences with it:

The first time I shared the prayer pipe was at a circle I attended in Vancouver, back in 2006.  Stupidly though, I inhaled the smoke at the time, as I was a smoker.  I wonder if the ritual had any hand in the start of my initiation, for it was after that trip that I returned to Toronto to find myself deeply involved in a transformation.  I am channeling that tobacco can open doors for some who use it ritualistically, and if this was to be a necessary part of my life, it may have aided in the beginnings of my initiation.

The second time that I recall passing the prayer pipe was when I was deeply spiritually ill, and a family friend and medicine man agreed to meet with me for healing.  Passing the pipe, it was mostly a discussion of the pain I was feeling - as the medicine man instructed me to "be patient" with my healing, I eyed a little snail crawling across the ground, a reminder of what he was saying.  Shortly after this meeting, I was able to invoke St. Jude with prayer, while in hospital.

My mother, who once worked in a prestigious native gallery, gave me a personal prayer pipe she had purchased from her place of employment.  Being a smoker at the time, and not one to consider things a little better, I think I may have used it a couple of times for recreational purposes - rather disrespectful I suppose, but ultimately not harmful, other than recreational smoking not being good for one's body.  The pipe was something I held onto as an artifact, it's a beautiful piece - a soap stone bowl with a detachable wooden shaft, and some strings of doeskin leather hanging from it.

In channel, just the other day, I got the sense tobacco was once again something I should turn to for prayer for help with my healing, but instead of using the method of sprinkling it over fire (a perfectly valid method of using it, according to the indigenous people in my community) I was to use the pipe, and take it into my mouth while praying - just not inhaling it this time.  Cautious about the nicotine becoming something I could develop as an addiction again, this is to be done ceremonially, only when necessary or for special occasions.

It's quite possible I have been stuck in a "shamanic initiatory vision quest" for 13 years, that I couldn't shut down with Christian sources, because half of my spirituality is more "shamanic", for lack of a better term.  The Eagle was a vision I kept receiving, calling itself the Spirit, and though I have associated this with the Father in Christianity, there is an eagle spirit keeper god in medicine wheel spirituality that is affiliated with tobacco called Wabun, so perhaps that is the god I have been dealing with for the more "shamanic" side of my spirituality.  Some of the prayers I uttered were that the circle close on my initiatory vision quest, that I be healed, that I develop as a visionary, among others.  Already there is a change in my energy levels, I feel like something is shifting.  When tobacco is used properly, it is very powerful and healing, and I seem to react strongly to it.  I am just a bit nervous of hitting the pipe too often, being the former smoker that I am, 11 years free.

I'll have to make an update on how this unfolds, but I wanted to post about this recent development - I might have figured out why my subconscious has been so wonky, why psychic ability has been on and off, why I may come across as peculiar and why I still require some medication.  It's an initiation of some kind that I hadn't figured out how to shut down yet.