Fatima update: The costume is finished! 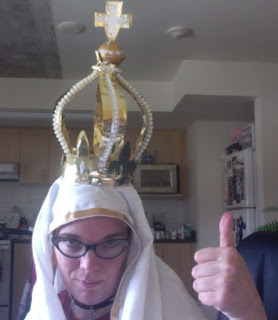 The Fatima costume is finished - complete photos of it all put together to come in the next little while!

One of the biggest challenges with this one that I thought would be difficult was affixing the crown to the veil so that it stayed firm in a way that wasn't obvious.  I decided to use a ring of velcro on the veil that would attach to a ring of the opposite part of the velcro in the crown, so it could easily be pulled on and off for storage.  I held my breath as I slipped the veil onto my head, but there was nothing to worry about - it holds very well, and feels like it even has some wind resistance.  Apart from perhaps a couple more finishing touches I may add to the crown, this costume is done, and it's going to look quite good.  I want to get as much mileage as I can out of it this year, so I am likely to go to several events in it, including a witch ball happening next week.  WITCHfest is on this month (an annual event that celebrates the end to the law enforced against witchcraft) and there's a series of interesting things to attend, including this ball, so that's one opportunity to wear the costume.

I finally got to chat again with that nice man who runs the shop, the one who is a powerful psychic - I'm due back again soon for further chats.  I demonstrated my reading technique, he said I was accurate about him and also that my method of reading was unique to me - he has never seen my style performed by anyone else before.  He also gave me pointers on refining what I already have.  It seems he wants to help me further.  This is wonderful - I had been praying for a teacher to enter into my life... hopefully he is the one.

The sacred feminine is something I have been concentrating on more as of late, trying to grow its influence - the sacred masculine is already quite strong in my life, but the feminine probably needs more attention.  So (speaking of the Virgin Mary) the Mother is a large part of my prayers and devotions as of late.  How appropriate that I would be dressing like her for Hallowe'en then!