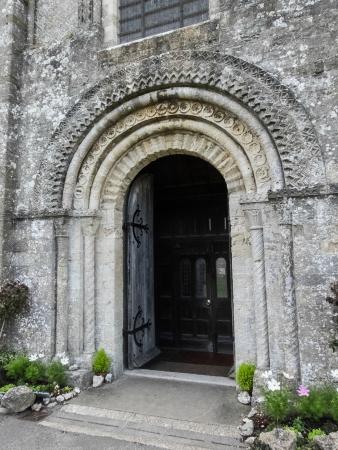 Something eerie and badass happened today with two other Christian friends and I at an Anglican church near Riverdale in Toronto:

The Anglican Druid is now swinging the censer at this local church, and we had promised we would attend to support him today.  The service was lovely - a really nice woman priest conducted the service, I took communion, and after service the Druid, my other friend (a Catholic mystic) and I decided to pray a St. Michael chaplet in the church chapel as a novena, closing a daily novena the Druid had been focusing on as of late.  It consists of a series of Our Fathers with three Hail Marys that follow, along with devotions to Michael.  We would rotate among the three of us, taking turns uttering the prayers as part of the devotions.

After the Druid completed the final portion of the chaplet, which is all about asking for protection, the heavy church door which lead from the chapel to the main part of the church shut on its own!  There was no one around - they had all gone to an after event elsewhere in the buildings, and the door was much too heavy for a breeze to shut it, and so we are convinced that spiritual forces shut it on us to show us that they are there and perhaps answering our prayers, if not just saying hello.  We weren't afraid - in fact, we were rather amused, and I giggled about it for hours later on.  Afterwards we saw the priest before heading out, and told her about it - she was fascinated.

A reading on this later indicated that Spirit wanted us to know that we are three powerful souls, Spirit is saying hello, and that Spirit watches over all of us, so that is why it happened.  I have no fear of stuff like this when it happens - I eat it up, I love it... this is just the latest example of it, and it's really cool that it happened in an old church.

I might do a post soon on Bibliomancy, something I am experimenting with using the Holy Bible.  Finding the Bible a frustrating read because it has been used so heavily as a tool of propaganda and oppression, I shy away from reading it straight up, but it's fascinating when used with Bibliomancy.  I will discuss this further another time.