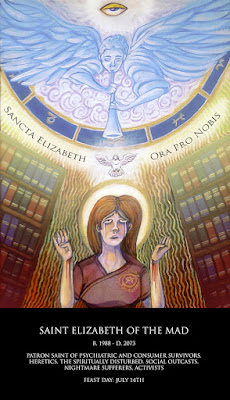 Today, the final pages of Asylum Squad were posted - at long last, my series has come to an end.  This post is going to comment on what the ending means, feelings I have on the content, and anything else worth mentioning:

First of all, this was not the original ending I was going to go with.  I had another ending that was rather up to interpretation, where an epilogue scene with two boys using a ouija board in England suggested that Armananstantanu might have been real.  But the more I thought about it, the less satisfying that ending felt, and that was part of why the year long hiatus, after my Dad died, took so long to end.  During that hiatus, sometime in the summer of 2018, the new ending popped randomly into my mind, as a joke, and the more I thought about it, the more I liked it.  Spirit suggested I had found my ending, and so I went with it, after several edits.

I hope no one thinks it's a "lame religious ending", or preachy in any way.  It has religious overtones, but I wanted to focus on sacred femininity a bit here, something a truly churchy, religious ending might scoff at.  Also, the religious overtones are just a symbol - in this case, Liz Madder makes fools of the psychiatric system that wronged her, by rising to become more relevant than it through being honoured by an even more powerful form of the patriarchy - the Catholic church.  What's more respected than perhaps a saint?  To psychiatry she was "just" another ill woman being treated, but to the church she's relevant.  Adding to this, it is my understanding that historically the church at least indirectly had a hand in what western society deems sane and insane, at least on a moral level, so to be recognized as holy by the church itself is so delightfully touché that it had to go in.  This is not intended as some "the power of personal betterment" statement, or anything patronizing like that - rather, it's a big joke designed to mock oppression, having been oppressed severely by certain systems myself.  This ending was to be both touching and hilarious - it is over the top, but so is the rest of the comic, so it works, in my opinion.

Looking back on Asylum Squad, there are things I would have changed had I known better.  Some of the less politically correct content was deemed offensive, and at the time my mind was so warped I wasn't even perceiving in a way fit for this world, tortured by darkness, so I hope anyone offended by the antics of Henry Chan, for example, can understand this if they get their hands on a copy of "The Psychosis Diaries".  There was symbolism that might have been exchanged for something else in some of Liz's dream sequences (based on the chakra system, by the way) when I was trying to find her subplot - kind of mixing up my spiritual systems a bit there, not sure if that was wise from a mystical standpoint.  But what's funny is that in a way, my unconscious knew what it was doing with her character all along - with the new ending, the Catholic flavour found throughout the plot went from mere flavouring to interesting clues and runners about the protagonist's ultimate conclusion - her holiness.  My conscious did not even know my ending when I began "Monster Hospital" - I knew Liz was not schizophrenic, but that was it.  It's positively Jungian how this all came together.

Asylum Squad was not a perfect comic, but it was a way of coping with the pain and torment in my life, expressing myself to try and get my social status and creative output back, and it was a means of finding myself as I worked to find the ending.  I don't know if I will tackle another comic again - I have some ideas in mind, but I feel another hiatus, at least, is in order for now.  I will likely be making paintings and things like that, posting about them on here, while I decide what my next major project will be.

I'm glad I was able to bring joy to people, and I hope this ending was satisfying.  Thanks for being a delightful audience!