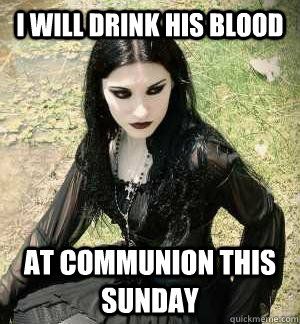 Oh dear... it seems like I am slipping into a goth phase!

I used to be a bit of a rivethead, back in my 20s, which is goth's industrial cousin, but later kind of abandoned it for a more hippie seeker look.  I also loved lolita fashion for a while, but it proved to be pricey, and the community is full of little shits who are haughty about clothing brands and other things that seem ultimately insignificant.  On boring dress days, I'll dress in stuff my mom gives me - still with style, but more conservative.  My hair isn't that interesting, since my job requires that I have conservative hair, so I grew it out and often wear it up in various ways.

I guess I just started to feel extremely goth about my life, having survived demonic attack, to the point where I killed the damn thing, the whole mental hospital thing, the spiritual horrors and drama that my life has shown me... kind of makes me want to wear heavy eyeshadow a bit more often.  But I won't just settle for any kind of goth - I want to be the gothiest goth, in a weird Catholic way, with crosses and rosaries dangling from everything.  While virtually every other goth I see is off loving Satan and his stupid demons, I am making fun of him, killing a demon and reading naughty details about terrible people who piss me off.  (I'm also slightly heavier set than I'd like to be in my gut, so I might as well wear more black - it's slimming.)

I feel rather silly that this is happening now, since I am pushing 40 - I often kind of made fun of goths a bit for being rather unoriginal with certain trends, and their cheesy melodrama is a real eye roller.  Still, I like a lot of the music and clothes, and my life has been about as goth as it has been punk - which is to say, VERY.

Not sure if this is a phase I am going through, but my goth friend is amused that suddenly she is wearing more colour, and I am dressing more like how she used to dress.  When I read psychically about this, it says my style is going gothy, and it's because I killed a demon, want to feel badass about it, and that satanism is going to look particularly stupid to me as time goes on.  Because what's more badass than worshipping demons?  Killing them.  (I also want to be more interesting aesthetically than a satanist goth - I picture those chicks listening to witch house music and giving blowjobs in cemeteries.)

Also - I think the "dark field" thing I sensed might be some after effect from this whole thing, and I am now directing my prayers to Grandmother Moon for assistance.  Smudging with sweetgrass only got me so far after a certain point - I felt reactions in my soul, but not change.  This is something I need to keep working on, and I know that a devotional approach is the only answer - that's the way it's always been.