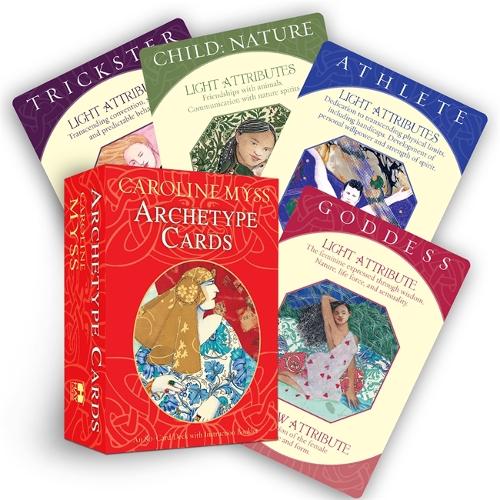 I like to use these cards as a means of breaking down the qualities that Spirit and the Akashic Records see in a person's character when reading someone psychically.  I originally bought these as a deck for my mother, who is a Carolyn Myss fan, but she never used them, so she gifted them back to me.

They run through the light and shadow qualities of all the archetypes listed, so one could either take on the positive, or negative, or both, of any in the deck.  There are some blanks to fill out too, though I haven't created my own yet.  This is an interesting method of analyzing someone while using my method of psychic interpretation.  Though not what the cards were intended for, they work wonderfully, and I have gotten some interesting results with them, including many that friends I read for, who named names of people they know, can confirm as accurate.  If I ever go into the psychic lady business, this deck might end up being one of my go-to staples for reading people.

I bought a book on reading the Akashic Records, which I have yet to really read, but it suggests one should avoid doing some of the things I am doing with the Records, like reading private details, because it implies the info can come out wrong, or something.  I am not sure if this is just a moral goody two shoes thing, but I seem to be able to do it anyway - perhaps Spirit thinks my life has been so terrible that I deserve a little bit of naughty fun.  I am still refining things, and it gets better all the time, with more and more accurate details emerging, confirmed by those I read for.

With all the strange phenomena and seeming psychic power I have, I sometimes wonder if stigmata is indeed next (haha).  It was something I craved on my more Catholic obsessed days, like a Judy Blume character longing for her period.  My solution to such a thing would be maxi pads on the hands, I think, as ridiculous as that sounds.  Gotta protect the bedsheets somehow.  Yeah, I know gauze exists, but maxi pads on the hands is just that much more edgy and cool, right?  At the very least it would make a fantastically amusing Always commercial, with a bunch of nuns in a convent running to a pharmacy because of their stigmata.  You don't see advertising of that caliber much these days.  <_<