Funny story at the cathedral today... 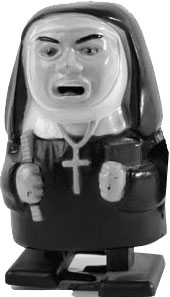 I HAVE to talk about this one, it's just too juicy not to put on this blog.  This story is GOLD.

After doing some drawing at a local cafe (some pencilling for the next two pages of 'Asylum Squad', if you're curious) I decided to head over to the cathedral I often spend time in when I feel the need to be in a sacred environment.  Today I was gothed out in a relatively modest looking dress, no cleavage, slightly above the knee skirt, made of black and red lace.  I wore studded wrist bands, my saint medal collar, as well as the usual array of Catholic jewellery, my hair in a ponytail, dark lipstick, and knee socks with flat mary jane shoes... nothing terribly provocative, certainly not the latex nun habit, or anything like it.

As I approached the cathedral doors, the Catholic nutjob who basically lives there that I have previously described as "The NPC" (and sometimes "The Pope's Lap Dog") stands in front of me, saying "Oh no - you're not going in there!  You are not right!", trying to prevent me from entering.  I said "Oh yes I am - I have every right to enter, just as you do!" and brushed her aside, opening the doors.

After bowing and anointing myself with holy water, I took a pew near the St. Jude statue, only to have this lunatic sit directly behind me, attempting to hover like a store clerk watching a teenager.  So I moved over, and she followed, and I said: "This is ridiculous - you are making me feel uncomfortable!"  She muttered something else and I said: "If this doesn't stop, I am fetching security!".  Then she ranted about some nonsense about what's right for the church, something I don't remember, and I shouted: "This is just fashion, lady!  I come here all the time and I behave myself!  You, on the other hand, are a SINNER!"  After that, she briskly turned and walked away, defeated.  My Roman Catholic guilt trip was effective.

I did a reading about the situation, later at home.  Apparently she might have gotten a vibe from me that I have satanic leanings, based on my outfit, which made me roar.  If that's true, I'm sure the "sinner" line shook that idea up a bit.  I also prayed to the Virgin Mary for her, that she learn a lesson about personal betterment.

This is a woman who often wears one of those lace veils on her head, religious garb of her own, brings flowers all the time, sucks up to clergy, and tries to dominate anyone she sees who rubs her the wrong way, usually women.  She is like a stupid little dog that loses its temper over the mailman, the kind of thing you want to kick - something horrible like a shih tzu with a chip on its shoulder because it's a shih tzu and not a more interesting breed.  She is a religious nut like no other I have ever seen before - I don't even think the Jesuits who run the place know what to do but pity her and let her come, because her reality is probably really sad.  She's like a "Jesus got me off meth" kind of weirdo, appearance wise.  Her life is probably hard, or has been, but she has no right to do this shit to me or anyone else.  A drunken asshole with a bottle of Crown Royal on a rope, around his neck, came in and yelled racial slurs at a security guard in there one time... I saw she shouted nothing at that guy for that, probably because he was a man.  Maybe she thinks women are meek so she can take 'em, but this will not fly with a woman like me.  I have no time for maggots like this after the kind of insulting blowhards I have had to deal with in places of authority.  Go cry about your sins in confessional, you peon.

If this crap happens again I am going to go full on Sister Penance with her and make her question herself as a Christian.  What a change from dressing in latex with the United Church and marching with ministers in drag down Yonge St for Pride 2019.