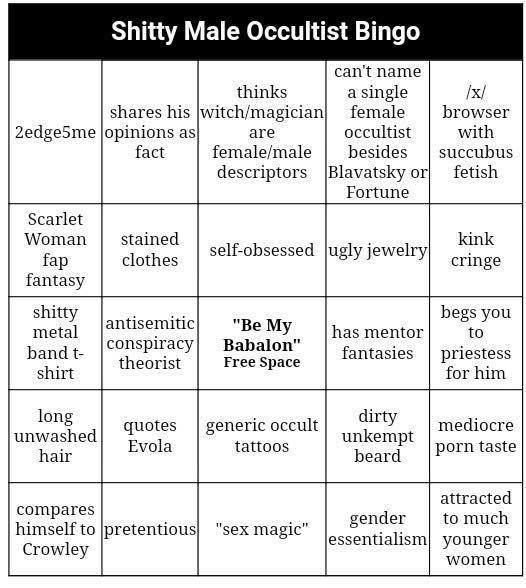 This made my day - these guys are why desperate occultist ladies seek out nice Christian boys, among others, out of desperation, as I have previously discussed.  Left Hand Path spirituality like Thelema may be good to get the ball rolling with the mind, but is limited in ultimately amounting to much more than producing interesting effects, based on my studies of mystical accounts.  One must go beyond the mind to really engage with the Spirit - the mind can trap you and limit you if you get too involved with it in paths like this.  Also, servitude to creation will guarantee you greater power than self-satisfying pursuits, though I have no problem at all with anyone trying to accumulate personal power for its own sake.  It's just not likely to lead to as rich an outcome as working for the Spirit directly.

Oh, and speaking of generic occult tattoos, one occultist I know of online recently got a slutty satanic tattoo done on their ass, which is going to look really bad on a geriatric backside, and could lead to severe elder abuse from a raging Filipina in an old age home.  I have a tattoo now I wish I had never had done... not sure what to do with it (it's an Rx with a cross out symbol over it, on the back of my neck).  If I ever get another tattoo, it'll be some ostentatious Catholic thing, probably, like a flaming heart with thorns on my chest.  As for the neck tattoo... cover up, maybe?  <_<