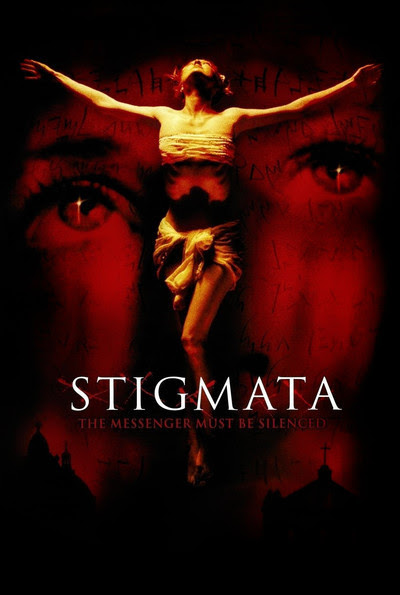 Here's one that many have recommended to me, that I had never seen, as someone as fixated on the Catholic faith (and religion in general) as I am.  I found a copy at BMV for just over $6.00, went home, popped it into my player, and was not disappointed.

Yes, it is Hollywood fare - a Catholic horror flick, but it's so satisfying.  In fact, I had such a powerful reaction to some of it, that I had to grasp my transmuted rosary when I started to tear up.  Seeing the protagonist go through spiritual agony brought me back to my own religious torment - an excruciating pain that no one understood, wrote off as mental illness, and where virtually everyone treated me like dogshit.  (My current friends don't know how bad it got for me... others who knew, a lot of them, don't talk to me anymore.)  This is a lonely sorrow that we westerners don't know how to resolve very well.  Good thing I had the strength and wits to conquer my suffering, good thing my torment was a necessary aspect of my growth, and thus it was meant to happen.  My channeling even started to react, saying "your soul is moved emotionally by this movie".  While most might see it just as conventional horror with religious themes, my soul saw something deeper here that at times was a little hard to watch.  Normally horror films aren't scary to me at all.

Something else hit me during the scene where Frankie is carving a message into a car hood with a broken bottle - she shouts something in what is later revealed to be a dialect of Aramaic, a language I was not familiar with the sound of, but then I realized that the "gibberish" I have been known to channel from time to time might have actually been Aramaic!  It certainly sounded like a language when it happened with me, but not being a knowledgable linguist, I did not recognize it... until now.  Channeling in other languages is known to happen... it's interesting that I might have channeled the language of Christ.

I will definitely have to play this one again for one of my movie nights, I know at least 4 friends who would want to watch it, even if they have already seen it.  It amazes me how my soul reacted so powerfully to this, to the point where I was weeping.