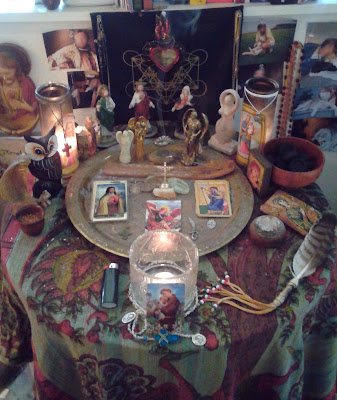 I'm beginning to now, once again, question how to define my path.  Christian overtones, of the more Catholic variety, are of course a major factor, but "folk Catholicism" might not be the way to go about describing this.  Something else is at play here, and I don't even know what it is.  Whatever it is, it works for me, and it seems to be a technique of going about spirituality that is unique to my own experiences - I can't find anything else truly like it.

It's as though I have taken into account ideas and practices from various paths, ones known to work harmoniously, and have instinctually combined these elements, adding more to it even now, to generate something original.  There more I experiment and work with it, the closer I come to truth and understanding of what's on my hands here.

This is a technique I probably should wait on discussing much of on this blog, for I feel I need more time for growth, but I can say that part of it involves covering as much spiritual invocation ground as possible, and playing with it until it amounts to a success.  It also is a technique that requires extreme commitment and devotion, and some servitude to God.  Tobacco, I have recently discovered, is an excellent means of invocation of powers of the Creator.  Plant medicine and resins play a major role in how I work with spirituality.  Indian ideas of death and reincarnation are also a factor, as are other ideas of religions like Buddhism and Hinduism.  Christian practice is the core of the style of devotion - probably, for me, as I came from a culturally Christian background.

It's interesting to see what this could amount to, once I get to a higher level, and can explain it better.  Maybe I have a new method on my hands for spiritual betterment?  I guess I can't truly call myself Roman Catholic at this point now, only that Christ and the Virgin Mary are major figures in what I do, and I use Catholic ritual a lot, and it works.

I shall likely return to these ideas, as an article, when I have a better sense of what I have under development, and when I know how to define it.  I often jump the gun on this blog with ideas before I have a solid understanding of them, and I want to avoid that now while I seek to define what I am doing.  I also don't want to lump myself in with the "I am not religious, I am spiritual" group, as I find that a bit of a cop out... there is something truly religious to what I am doing, it's just hard to define it.