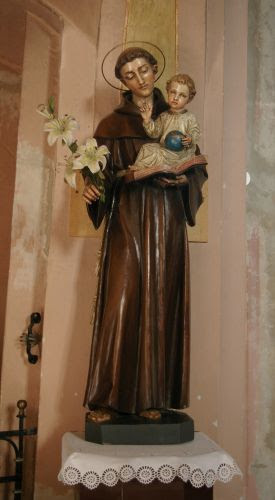 One of the things I have discussed a bit on here, to some degree, is my occasional reaction to religious iconography, depending on whom it is portraying.  Though this kind of thing also happens in more Protestant environments, it is very strong in Catholic ones, hence my draw to this religion.  Anglicanism, the go between, just seems like Protestantism in drag to me... it's not quite the same with their icons.  I like the Anglican church a bit more politically, but the faith isn't moving me the same way.

I was in church recently, as I often am, at the cathedral I like to go to, and my head suddenly drew the shape of the cross, then lurched to the corner where a statue of St. Anthony of Padua stood.  (He was a saint I have prayed to for help with my struggles.)  Discreetly, this being a Catholic environment, I whipped out my tarot cards and, on the pew, did a reading on his message to me.  It was a general congratulatory message, as well as some information I am not going to reveal on here, but also that he is watching over me.  This kind of thing has also happened in the same church with the St. Therese of Lisieux statue - her message was that she is amused by me, likes my playfulness, and that my soul is fine and watched over by her as well.  She was not one I even officially prayed to at first, but I guess because I frequent that environment there was some kind of response - I am not entirely sure how this works with icons.

The Virgin Mary and Christ are the other two whom I get strong reactions from - I have conversations through channel, relayed through the Spirit, of what they wish to say to me.  It's very powerful, and makes going to church much more fun than it is for most people, I guess, who don't get it.  (There was a time when I was sitting under a Virgin Mary statue, in a more politically progressive Catholic church, and the message from Mary was "Welcome home... you will find this church to be the best in the city to suit your views.")

I went to another church I hadn't been to before, a Portuguese Catholic one with the relic of a saint in it - it felt powerful in there, but I couldn't stay as I had an event to get to.  I wish to return to see what comes of it.  Unfortunately it is not a church that is open all the time, like the one I frequent.