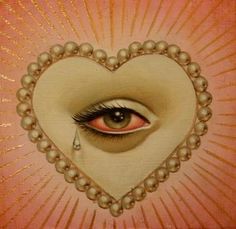 In 2006, when I first had my overwhelming desire as a seeker to open to psychic insight, I attempted to do so by smoking copious amounts of marijuana while concentrating on my third eye region.  As a result, I had a disturbing reaction where I was flooded with dark imagery and a sense of dread.  I am beginning to suspect that the reason for this was because the demon was the one who opened it, and so that is why I felt like I was going mad.

It has since come to my attention, from studies of mystical accounts and chats with serious seekers, that the idea of the third eye being the most powerful centre of psychic insight is not just bogus, but also rather dangerous to assume.  An Indian fellow I met at a meditation group told me it is tantamount to prying open the Eye of Shiva, the Destroyer, which can cause lunacy if done prematurely, or incorrectly.  Having survived my third eye opening from hell, which was probably demonically influenced, and something that certainly led to a kind of madness that no one should experience, I can tell you that the centre that really brought me insights was not the third eye (or Ajna) but instead the heart (or Anahata).  When this centre opened, it was with Christ, and overtime it brought more profound, powerful messages, experiences, and the stillness I so richly required in order to level out.

In Evelyn Underhill's "Mysticism: A Study in the Nature and Development of Spiritual Consciousness" (a fantastic read for any seeker), there is an emphasis on heart centric spiritual opening, something that I think is a bit lost on certain kinds of seekers, including people in the LHP (left hand path) crowd.  When the heart is open, it is of course something that leads to greater compassion, but also a knowing, and a wisdom, that was lacking beforehand.  One truly gets a sense of what they speak of, there is a confidence and power to one's wording and conduct.  I have grown into a more heart centred human being, so I am not trapped in my mind anymore when I think.  I actually think less... this is not to say that I am not a thinker, that I do not contemplate, but there is less rumination and drive to keep my mind occupied.  Stillness will do just fine, and breeds more sophisticated ideas.  I do not "see" with my third eye... I perceive my insights with the heart.

The way I perceive what is seen is through what I have been calling "vocal channeling", but also with "spirit writing"... I simply concentrate on the question, and observe what comes out.  It is as second nature now as using any other mental function, but it's coming from a level in which I have to "tune in", which I can do with ease.  I do have control over what comes out - it is not like I don't.

There is a degree of "blockage" from having battled my demon, which resided in the heart centre, which remains, but is not what it was.  This makes some information murky, incomplete, or sometimes flat out wrong, but I find that with practice and prayer, this problem is being alleviated.  Reiki on my heart centre would cause interesting reactions - I often convulsed, talked in tongues, or made strange postures when this centre was tackled.  Transforming what remains seems to be the answer, so I keep praying, every day, to move it along.  Knowing where I have been, being reassured by the Spirit as to where I am going, I am convinced this issue will be a thing of the past, but spiritual outcomes can take time to fully manifest, so I must be patient.

I feel a stillness in my soul, overall, that I long for my mind to catch up with.  I am still convinced the day will come that I may leave the Latuda pills behind.