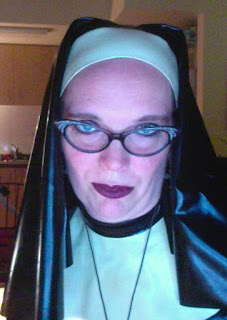 It can be very hard to find a likeminded "coven" with the way I go about my spirituality - certainly, I have found a circle of interesting seekers to discuss spirituality with, ranging from left leaning, pro LGBTQ+ Christians, to equally progressive Muslims, to non-denominational spiritualists on a path of their own.  We have fascinating conversations, consult the tarot, recommend books to one another.  And yet, it's hard to find many who comprehend the specific practice I engage in, a practice I am discovering as I go along and experiment.  I am hoping to discover some kind of "Christian Witch" community in Toronto, but so far I am coming up empty handed.  Salem, Massachusetts, has a movement going on that I have heard of, but I don't know much about this kind of thing in T-Dot.

(I don't truly identify as a witch, at least not right now, at least in relation to the idea of utilizing my will to achieve a result.  I don't actually cast spells... I use prayer to higher spirits to usher in changes in my life.  So in that regard, I am more mystically oriented, I would say.  But I think that Christian witches might get me, because of my interests, my devotion, those figures whom I pray to, my vibe.  That's why I am seeking them out.)

Apart from the very cool Christians in left leaning circles whom I know, I don't feel like religious Christianity would ever truly accept a person like me... and it's not just because of my latex nun habit and my foul mouth.  I go about my practice in a way that defies the mainstream, I don't even read the Bible, not trusting it because of how it has been used as a tool of oppression and propaganda.  I much prefer to read mystical accounts from the holy men and women of this path over the scriptures.  It feels a bit more straight from the horse's mouth, as well.  I also believe Jesus was the prophet Isa... he survived crucifixion, escaped to India, became a Buddhist monk, and is buried in a tomb in Kashmir.

The hippy community would probably not get me either, rejecting anything Christian as not as trendy or "psychedelic" as Eastern religion, or whatever... anyway, appropriating Hinduism is not something I am interested in at all.  I love researching Hinduism, I flirted with it for a very long time, but I refuse to half ass my spirituality like some people do.  I get the sense that most (?) hippies are notorious for this kind of stuff.

Occultists would also probably turn their noses up at me, shunning anything with the name Jesus attached to it, even when it's done the way I do it, even when there's no dogmatic bullshit attached, even when it's playful and natural.  Wiccans especially don't like Christianity.  What's interesting is what one said to me once, though - ex-Catholic Wiccans make the best witches.  I am not sure why they would be "the best", but I found it amusing.

I am curious to meet indigenous Catholics.  The idea of an indigenous Catholic is very strange to some people, considering the troubling history between indigenous societies and the church.  Nonetheless, there is a strong relationship between the two worlds in certain indigenous circles, and I am curious to know more about the meeting of these two paths, when they are harmonious.  I wonder what some would think of a honkey like me.  I certainly wouldn't try to imply any spiritual authority with things like smudge (which I have used to help myself), I would approach with humility and respect, and try to tell my story and explain how I arrived at where I am, after what happened to me.

A gal in a metaphysical shop today suggested that I am an "Alternative Christian".  I liked that idea.  We had a long discussion about the Virgin Mary being a means of accessing the Great Goddess, among other things.  I am not sure where this is all leading, but Toronto is proving to have more spiritually minded people in various circles than I had initially thought.