Yesterday I was in a goth clothing store (perhaps the last independent one of its kind in Toronto that I know of) and I came across a lacy collar with an ornate heart with a cross on it.  Thinking that a Memento Mori inspired goth/punk look with Catholic goods might be fun to try as a style, I considered buying it, but the price tag for the item was a wee bit insane.  I found it online for a substantially lower price, but later decided I could probably come up with something equally cool with a punk collar from a cheaper store, and some of the stuff I already have kicking around my apartment.

I went to a shop today in Kensington Market that sells inexpensive punk gear and accessories, and bought two collars.  The first came like this: 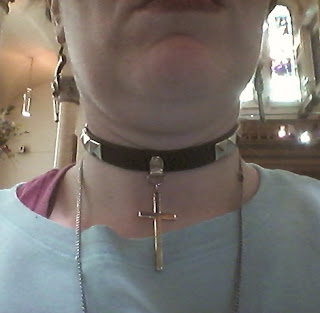 Just a simple studded collar with a plain silver cross hanging from it.   A mere $10, I snatched it up.  But there was another collar there I liked too, one with loops and chains hanging from it, and it was only $12.  Having several saint medals at home on a chain, along with a cross with the face of Jesus on it that I haven't worn yet, I broke out the pliers and began augmenting it until I came up with this: 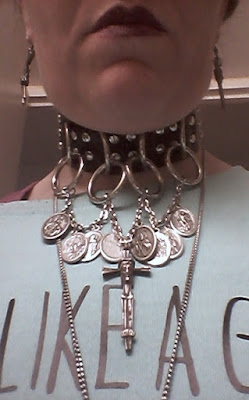 It's pretty badass looking now!  I might wear it out tonight for a dance club event.  :)