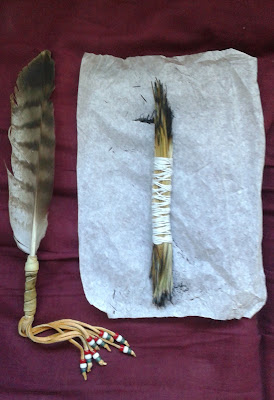 Here are two significant smudge artifacts of mine, that I wanted to discuss:

The smudge feather was something I decorated myself in a native crafts circle in my community, which is super cool - they have instruction on how to build everything from medicine pouches, to dream catchers, and even drums, baby moccasins, and ceremonial dresses!  The feather was one I came upon one day in downtown Toronto, on a side street (of all places).  Not sure of what bird species had dropped it, I found a site online for identifying random feathers, and it turns out that this was dropped by a red tail hawk!  I found that rather special, the Hawk being symbolic of the Messenger in native spirituality, so I held onto it, and later made this smudge feather out of it.  (BTW, the bead colours don't mean anything specifically... there was just a limited number of colours to choose from at the time, and these were the ones I chose.  Sometimes I make jokes about toothpaste, or the Italian flag, but really... they're just decoration.)

The braid of sweetgrass pictured here is an important item to me now, one which I will never ignite again, for this was the sweetgrass I used when I fought the demon while invoking seraphic assistance to enter me to attack it.  I had found this braid of sweetgrass in the hall of my building, up for grabs with other items, as if destiny had it planned out for me.  It was quite dry, but still effective.  Today, I wrapped it in string to keep it bound, and less likely to fall apart, and now I keep it wrapped in tissue paper for added protection.  Not an item I ever plan on getting rid of, just like how I feel about the transmuted rosary, and other power items.

BTW, here's my recipe for that potent smudge I came up with that drives dark spirits bonkers:

•Mix equal amounts of the following using a mortar and pestle:

•Spoon over a lit charcoal and drive the bad spirits away!

(It sure drove the dark one nuts when I used it on him - didn't kill it, but it had some weakening effect.  I imagine it would be good in other circumstances, too.)