Psychological torture (and coping with it)... 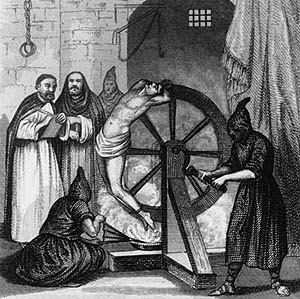 Psychological torture from the demon was a regular factor in my life for many years, and I had to learn that psych meds were the answer for toning it down.  Unfortunately, some bad shit happened before I really got it, but I eventually did.  But before that, I devised interesting ways of coping.  This post is about the torture I often endured, and the ways I lived with it.  (But I will not be providing excessive detail, for some things should remain private, and also - you probably don't want vomit caked into your keyboard.)

As I have mentioned before, the demon caused me more worry than fear... I was not afraid of it, I was concerned about what my life would amount to because of it.  When it was haunting me, before it got inside of me, it would whisper to me in the dark, as I bedded down for the night: "I'm the white horse... I'm going to kill you..." and I would tell it to fuck off and go throw some dishes in the kitchen, because it was a boring excuse for a poltergeist.  Wise?

Once it seemed to get more within my energy field, it began to feed me disturbing imagery and messages, and I had strange nightmares of sickening, disgusting stuff.  There was a gritty tone to these nightmares, as though through some awful film filter that made everything look incredibly bleak.  It tortured in controlling, psychologically manipulative ways, too - like having me cause problems for others, making social faux pas with friends and acquaintances, and convincing me to run away from everything, hiding in the shelter system.  I desperately tried to hang myself in a shelter one time, using a housecoat sash in a shower stall - after feeling a sharp pain in my chest, I let it go and slumped to the floor, ending up in CAMH once I told the staff what I had done.

In CAMH, at one point I felt like my arms were rotting with maggots chewing them up, I felt like I was being sliced into by invisible blades, my genitals being cut into... at one point it felt like I was having a heart attack, after I consumed some turkey.  There was a slight degree of comedy to the torment, as though some positive source was trying to filter the evil by at least making it whimsical, but this made it very strange in many ways.  Sometimes I would laugh and cry at the same time.

When I was renting a room, around the time the ceremonial tobacco mishaps were going on, I felt lost in a kind of film playing out in my mind, not realizing it did not translate so well to the world around me.  I was trying to fend this thing off by "casting spells", but those "spells" just seemed to fuel more and more of the horror.  It got extremely dark after I cast some spells with a Star of David and a Catholic rosary, as though taking on a whole new level of unholiness.  I wish I head learned to pray sooner.

Once inside me, the demon began to torture me in strange, sexual ways that I do not wish to describe because they're simply too gross to get into, and they do not deserve a voice.  I would try to keep my sense of humour throughout this, often telling myself that my life and psyche had taken on a David Lynch-esque quality (and hey, David Lynch movies are cool).  I would play vapid fluffy pop shit like Ace of Base and Haddaway's "What Is Love (Baby Don't Hurt Me)" to try and make light of the shit show my life had become... unfortunately, I now have a bit of a Pavlovian reaction to the song "Wheel of Fortune" where I just can't listen to it anymore, rather like how easy listening takes me back to getting my braces tightened (although easy listening has a special place in hell anyway).  The demon detested my campy musical tastes, so it would amp up the torture whenever this happened.  I could get away with playing Gustav Holst's "The Planets" because neoclassical was ok in its opinion, but even Jean Michel Jarre's "Oxygene" was offensive to it, and the response was that it felt like my brain was being destroyed.

Sometimes I had the unfortunate reaction of hurting myself mildly to try and counteract irritation, but that got me nowhere... this is why I considered the restraints angle.  Nothing truly bad came of my body, nothing permanent anyway, except for some scars from that time I attempted suicide in 2012 because of a failure on St Michael's Hospital's part to help stabilize me when I had crippling insomnia from all of this.  That was basically the final warning to wait to come off of medication, because it just wasn't time yet.  Since then, only 3 or 4 short hospitalizations have occurred, and they were pretty tame experiences.

Other ways of coping with mental torment have included the use of a weighted blanket, clutching a designated plush toy, rocking, and talking to myself... also, I have come to channel the Spirit as a kind of caring support figure that helps me deal with the more stressful times.

I will have to make a post soon about playing chess with this thing, it's interesting how it all came together.  My mind is the only part of me that still has anxiety about this... being very much aware of the soul as I am now, there is a great calm and confidence from that part of me, so I am sure at least on that level that things are fine.  But I am still going to give things time before I attempt reducing medication again, at least when it comes to going below 60 mg.