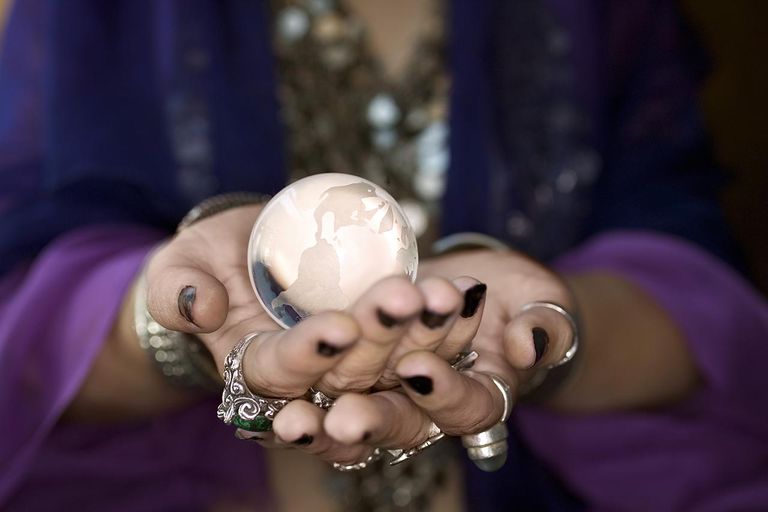 I have a mild concern now that I might not be able to develop into the kind of psychic who could read anyone or anything at the drop of a hat - certainly I present certain abilities, but they only seem to be showing me what Captain Killjoy, AKA God, wants me to see.  So it's possible, unless this changes, that the psychic skill I have is strictly to help me along my path, and not to be "exploited" for profit.  Major bummer, JHWH.

The way it presents is through channel, automatic handwriting and drawing, and the occasional (but less frequent) psychic vision.  The last vision I had was of the Eye of Providence when I was smudging with sweetgrass back in October.  Sometimes psychic input is spelled out for me very clearly in messages through the channel, sometimes, as in with visions or drawings, it's more cryptic and it's like a guessing game what is being said.  I keep a book of automatic writings by my shrine, I carry it to the cathedral when I go... as for tarot, as I have said before, I don't use spreads, I go through every card until I draw one or two and then the channel delivers the general message.

Often predictions for myself have been true and are confirmed in time... sometimes I can warn a friend about someone or something, and that too is later confirmed.  But this doesn't seem to be the kind of thing where I can really advise most people on things like money, love, and career... maybe I kind of can, but not enough to do it professionally, at least that is my worry at this point.

Some sadhus in India caution about being too showy with siddhis (or powers, as that translates)... maybe this is an example of that?  My analyst doesn't like the idea of me being a professional psychic... he calls it lower spirituality, parlour games.  Sigh, I just don't know what to do with myself then, since art is not a reasonably profitable income, and I probably won't make another comic ever again (it's exhausting and does not pay off... yeah, sorry guys).  I have thought about becoming a writer... I would write the strangest memoir about all of this.  But I feel I still need to "plateau" somehow in my life before I could even consider something like that.

Lately, a very strong message is coming through, repeatedly, without me prying to know, that someone I convinced myself hates me does not in fact hate me at all, is upset about bad things that happened between him and I (in a way that I did not think he'd be upset - as in, he is sad about them, not angry), and in fact enjoys my comic work... strange.  My mind is not convinced that's true, but my soul insists it is.  I suppose the Spirit really wants me to know this?

It's fucking freezing in Toronto, and I am rocking a black balaclava on most days.  I really don't care that I look like a bank robber version of Pussy Riot... it's the only thing that keeps my face from feeling like it's going to fall off.  This polar vortex winter is brutal, man.