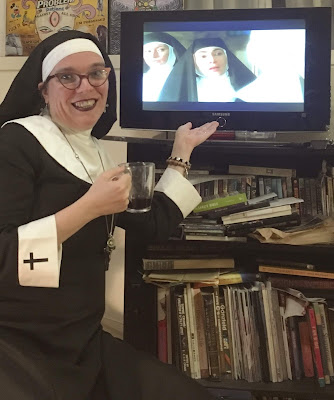 Well, we held the event... and it was great!  I served red wine and bought some rice crackers that look a bit like communion wafers, but we had tons of other snacks too.

I had gone to the rental store to get some nunsploitation flicks (I figured two would be enough), and said to the guy to direct me to his finest smut.  "I want lesbianism... I want flagellation... I want the devil... I want it all!"  He had several movies, so I settled on "Convent of Sinners" and another one called "Behind Convent Walls".

The first one we watched was "Convent of Sinners", which was amazingly trashy.  It starts off with a shocking incestuous rape scene... how classy!  Not too much longer into the film, the protagonist is standing naked in a room full of nuns while they ceremonially tie her little nun thong on her and clothe her in a habit.  There's an insane amount of sexual tension in here between the characters, lots of gratuitous flagellation scenes, exorcism scenes... the works.  One friend who couldn't make it really missed out missing this one.  I joked that if we sit down to watch it again with him, I'll be sure to pop over to Bed Bath and Beyond first and pick up a plastic sheet before letting him sit down on my couch.

"Behind Convent Walls" was a bit of a letdown after the first movie.  I was warned that this one was more arthouse... well, it certainly was more hipster.  I couldn't really follow the plot, but then again I was getting bored and distracted in conversation - someone plays a violin here and there (because of course they do - this is an erotic art flick, it's either gonna be a violin or an oboe), there's lots of sex but it's all about as hot as a life drawing class, the camera is jerky, it's in Italian (I think it was Italian?) with English subtitles... meh.  It just wasn't as interesting to gawk at after "Convent of Sinners".

All in all it was a fun evening, and an interesting intro to the genre!  We're planning on doing it again sometime.