My next comic project (if I continue making comics)... 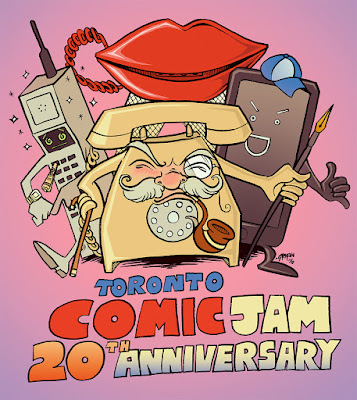 I have wrestled with the idea of abandoning comics after "Asylum Squad", because of the level of commitment it takes to create a series.  I have considered switching to writing standard novels, picture books, or perhaps just painting, but if I do make another series, I have been trying to figure out what it should be about.  Here are some hints as to what may be down the pipe, if I pick up the pen again for a comic series:

• "Big Phoney" is a rather absurdist character I once scrawled on a napkin at a restaurant in order to make a friend snicker.  He later became a recurring character in comics at the Toronto Comic Jam.  He's basically an anthropomorphic rotary phone, oxidized yellow with age, with a stuffy British accent and a propensity for tall tales.  We have been coming up with a series of phone characters, including Uncle Brick (the Gen Xer cellphone who is perpetually trapped in the 80s, addicted to cocaine, drives a DeLorean... that sort of thing), Lips the 1-900 hotline call girl phone, prostitute payphones lined up on the street, and Smart Aleck the smart mouthed smartphone... but there have been many others.  I think the theme of this series, when thinking back to writing class, should be ageism as presented through technology.  Being a relatively young adult, I don't truly grasp the social impact of what growing older can be like yet, but it's an interesting idea to combine rapidly changing technology with ageism as a subject.  Almost like a Pixar movie in some ways, only more adult.

• Another idea that I haven't really expanded upon yet is based on an interesting dream I had, sort of like "The Chronicles of Narnia" meets "Charlie and the Great Glass Elevator" - a girl enters her building's elevator and accidentally goes past her floor, but the elevator keeps rising, going beyond the top floor and she gets launched into a surrealist journey to get back home, using the elevator, which takes her to hidden realms.  It would also make a great video game, but I don't think I will make another one of those.

• Yet another idea I have would be to just make a rather autobiographical comic about what happened to me with the demon.  After what I have been through, I would want it to be a comedy - it's not worth dwelling on the misery aspects, I think it should be funny, even when the details are painful, because a lot of it was funny, and it's looking to be a case that the outcome is positive in my life anyway.

BTW, gonna name drop for a minute here - Ty Templeton's Comic Book Bootcamp classes are both relatively affordable to most, and worth every penny, and Ty is The Man when it comes to comic instruction.  I have taken his penciling, writing for comics 1 & 2, and inking classes, and he is a guru as both a real deal professional in the big leagues, and as a teacher.  Really helpful, great advice, excellent for critiques, and a helluva guy all around, as well as a friend.  If you live in the Toronto area and want to get into making comics, take his classes!  I went from zero to hero with his writing classes, if I do say so myself, at least when compared to where I was.

I will most likely be on another comic hiatus once "Asylum Squad" is completed, so I can figure out my next move.  I am pretty sure there is more of something in me, but I don't know what that is yet.  My Dad's death shook me quite badly for a while, temporarily destroying my drive to create, and my confidence in what I was making.  It's still a bit hard to crank it out like I once did since he passed.  But I've also been heavily involved in soul work, so much that it's at the forefront of my life, so there's that factor as well.