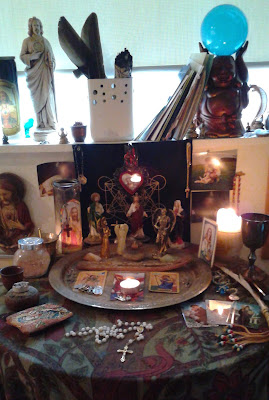 Thought I'd snap a pic of what my shrine looks like now - since "concluding" that Hindu deities probably weren't legitimately invoked or an aspect of my spirituality, they have been moved from my shrine and now serve as decor in my apartment, rather than ritualistic items.  The cobra statue is also moved away from this, as I worry that the cobra I felt myself take the form of was not in fact a power animal, but the demon showing itself, or a warning that it was about to pounce again when it came forward.  (I had brought myself into hospital again when it began showing up, to be safe.)

The milky white glass, formerly pink plastic rosary is on display in front here, as are various items representing saints whom I have prayed to, angelic presences, and of course Jesus and the Virgin Mary.  It's a bit dusty and I meant to tidy it a bit before taking this picture, but oh well!  Not as bad as it was last week.

I guess I will regularly post updates of this sacred space as it changes overtime.