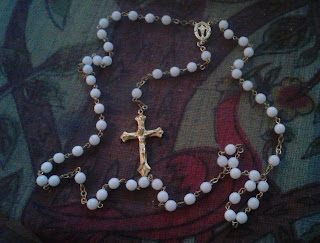 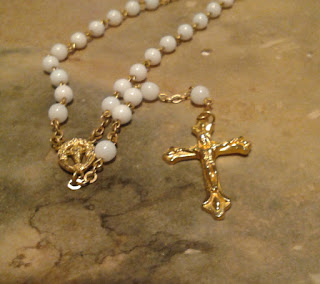 Ok - I am really obsessing about this transmuted rosary phenomenon.  You'll have to forgive me, but I might be talking about this for a while.  I am kicking myself for having never taken a picture of this item before this happened - I'm sure people will cry hoax on me, but I know this is real, and so do a couple of other family members.  It was just such an unremarkable looking thing beforehand, and I never imagined something like this would ever happen.  I think it was maybe $3.00 when I bought it at the thrift store.  It was cute and girly at the time, but now feels more luxurious in my hands.

I took it to the cathedral and showed it to the deacon I chat with there - he was rather fascinated, and told me that this kind of thing has happened with rosaries someplace in Europe where apparitions of the Virgin Mary appeared, which I never knew about.  Then he commented on the metal, asking whether or not it had changed or not.  I wasn't sure about that, not knowing my metals.  The crucifix I think might have been attracted to the magnetic clasp on my phone case at one time, I seem to remember it sticking to it at one point, but now IT DOESN'T AT ALL.  Aluminum doesn't cling to magnets, but neither does gold, and this metal feels finer than aluminum at least... I just don't know if it's gold.  I would have assumed it was a nickel that was coated or something beforehand.

I might get it appraised (without telling the story, of course), or at least find a friend who can assess metals well.  It just feels like a finer piece overall than it used to, and the metal shimmers a little bit.  Maybe it's still a cheap metal, but maybe the Hand of God pulled a King Midas while He was also transforming the beads... this is fascinating.

Regardless of how much it's worth now, I am never giving this item away!