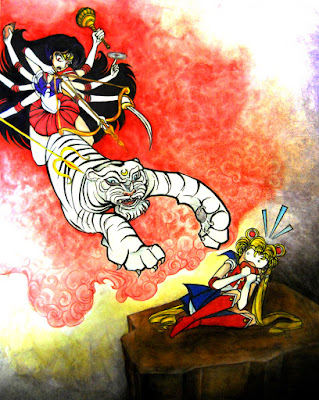 This was my final Design and Composition class piece from my brief time as an illustration student at Max The Mutt, which I tried out after being discharged from my year in CAMH, before opting to drop out of the program.

I kind of thought of doing a series of paintings of various anime and cartoon characters as Hindu deities, including the Sailor Senshi as various goddesses, Babar the elephant as Ganesha, and so on.  It hasn't led to much, thought they might sell at Anime North or something, but as time goes on I am getting less and less enthused about working the con circuit.

I figured fiery Sailor Mars was the best choice for Durga - here she rides a white tiger Artemis, attacking Sailor Moon (these two girls were often at odds in the series).  I think the original piece was accidentally left at the school, so I would imagine it has been destroyed by now, unless they actually held onto it.

I am trying to ween out all the "red herrings" in my spirituality, for I am sure there have been many.  Conclusions were drawn based on interpretations of phenomena and psychic input, much of it being compromised by sinister forces and subconscious pain.  Though Hinduism, as a path, stimulates my mind more when it comes to study, I am now reconsidering that it only serves me to apply the wisdom of the teachings in the Bhagavad Gita and the Upanishads, for the gods I was so sure might be involved were probably not truly a part of the path I am on.  I do have a strong appreciation and admiration for Indian spirituality that will never leave me, Hinduism in many ways is my favourite religion to study, but the further along I go, the more I realize I am on a very Christian path - not of your church nanny variety mind you, but instead an intense mystical variation that I think very few people could stomach, if they had to confront what I went though.  It's a shame so much of Christianity is watered down, corrupt, or bastardized these days, for what I am tapping into is very deep and rich, and I would love to have some kind of structure to follow that could satiate the soul.  Studying Kabbalah, I don't think, will complicate things too much, and there is of course Christian "Cabbala" (except I think I read that it was used more as a tool to convert Jews to Christianity).

Today the Anglican Druid and I are off to a Catholic gift shop run by some sisters - we wanted to check out what they have.  He might be my match when it comes to nerding out over spirituality, except while I'm a mystical seeker, he's a scholarly type.  I am seriously like a Pokemon fan when it comes to collecting religious stuff and looking into the saints - gotta invoke 'em all!